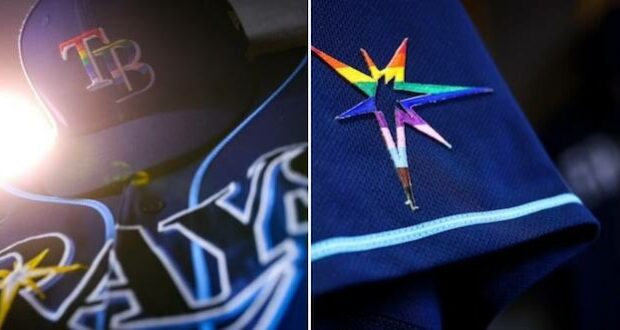 Jason Adam, a former pitcher for the Kansas City Royals, is taking a stand against political correctness during gay pride month.

Several Tampa Bay Ray players refused to wear pride night logos during the team’s game against the Chicago White Sox on Saturday night, citing religious reasons. The team added the flags, which include the Black Lives Matter movement, to their logos and reportedly were surprised that not all the players on the team wanted to participate.

“Pitchers Jason Adam, Jalen Beeks, Brooks Raley, Jeffrey Springs and Ryan Thompson were among those who did not, electing to peel off the burst logo and wear the standard hat,” “The Tampa Bay Times” reported.

Adam, 30, was chosen by team officials to speak for the players who did not want to be associated with the leftist ideology.

“A lot of it comes down to faith, to like a faith-based decision,” he said. “So it’s a hard decision. Because ultimately we all said what we want is them to know that all are welcome and loved here. But when we put it on our bodies, I think a lot of guys decided that it’s just a lifestyle that maybe — not that they look down on anybody or think differently — it’s just that maybe we don’t want to encourage it if we believe in Jesus, who’s encouraged us to live a lifestyle that would abstain from that behavior, just like (Jesus) encourages me as a heterosexual male to abstain from sex outside of the confines of marriage. It’s no different.”

“It’s not judgmental. It’s not looking down. It’s just what we believe the lifestyle he’s encouraged us to live, for our good, not to withhold,” added Adam. “But again, we love these men and women, we care about them, and we want them to feel safe and welcome here.”

The news comes after Florida Republican Gov. Ron DeSantis vetoed $35 million that were earmarked for the Tampa Bay Rays after the team released an anti-Second Amendment statement. The decision comes after the Rays published a statement last week saying that the tragedies “have shaken us to the core.”

The organization added that it was donating tens of thousands of dollars to far-left anti-Second Amendment organizations. “The Rays organization stands committed to actionable change and has made a $50,000 commitment to Everytown for Gun Safety’s Support Fund,” the statement said.

For its part, the Kansas City Royas are also celebrating Pride month but it has not been revealed if players will be given rainbow flags to wear on their uniforms.