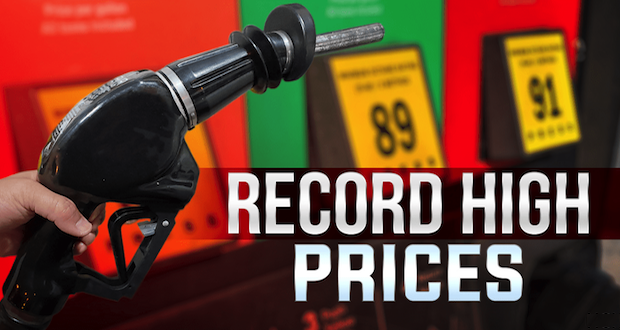 On Monday gas prices surged again, after marking a milestone for President Joe Biden over the weekend. Gas prices doubled what they were just last year when he was inaugurated. That fact has become a political millstone tied around the neck of Democrats seeking reelection in November.

According to the American Automobile Association (AAA), on Monday the average retail price of regular-grade gasoline climbed to its highest recorded price of $4.865 per gallon.

Besides setting a new record, the sky-high price also happens to be a little more than twice as high as the week when Biden was sworn in.

The national average retail price for a regular gallon of gas for the week Biden was inaugurated, which ended on Jan. 25, 2021, was $2.39, according to the Energy Information Administration.

Biden, who has faced a torrent of criticism, even from his own party, over soaring gasoline prices—and high inflation more generally—has sought to pin the blame on factors such as “Putin’s price hike.” He’s also attempted to blame U.S. oil industry “price gouging”– something not based on facts.

While Biden ordered a release of crude reserves from the national strategic stockpile in a bid to cool soaring prices, the controversial move has had little-to-no impact while dangerously depleting a stockpile meant to be used in a national emergency like wars, hurricanes or terrorist attacks.

Biden touched on a few of these themes in a June 4 tweet, in which he said he “led the world to coordinate the largest release from global oil reserves in history, directed the sale of gasoline using homegrown biofuels this summer, and more.”

“These actions have already helped to blunt what would have been an ever-larger Putin Price Hike,” Biden claimed without giving any facts. Biden’s reliance of Putin as the culprit has become a joke in political circles.

But Americans are not laughing. Neither are economists who say its the administration’s policies like ending pipeline construction that are to blame.

A number of experts and industry figures say Biden’s radical climate agenda has discouraged investment in new oil supply projects and so is holding back initiatives that could put a meaningful dent in gasoline prices. The United States was a net oil exporter at the end of the Trump presidency.

Dan Eberhart, CEO of Canary, one of the biggest privately owned oilfield services firms in the United States, wrote in a recent op-ed in Forbes that moves on Biden’s part like putting new oil and gas leases on ice send “the wrong message to the oil industry when it comes to new investments in supply projects.”

“We are going to grapple with high prices” of gasoline until we “collectively accept” the fact that the low-carbon transition will take longer and that fossil fuels will continue to play a major role in the U.S. economy “for decades to come.”

Previous: What is Shavuot (Pentecost) really all about?
Next: Former Royals pitcher refuses to wear team’s gay pride logo