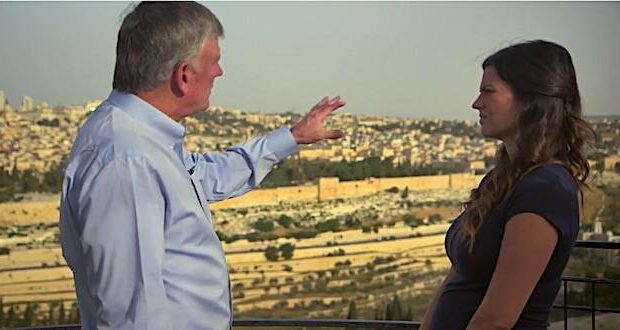 Franklin Graham and daughter Cissie on a 7-day tour of Israel.

In videos, Franklin Graham and daughter explore why Israel matters

In a new video series, viewers can travel across Israel with Franklin Graham and his daughter Cissie as they explore why Israel matters.

Israel is a small country, about the size of New Jersey. Yet, so often, the nation is at the center of international debate and controversy.

“Whether you know it or not, this tiny nation — the events that surround this nation — affect you, me and everyone around the world,” explains Cissie Graham Lynch, daughter of Franklin Graham and granddaughter of Dr. Billy Graham.

In her latest Fearless podcast, Lynch explored the topic of Israel’s significance, challenging Christians — especially those in her generation and younger — to learn more about the Jewish state and its Biblical roots.

You can listen to the podcast with special guest Skip Heitzig online.

Though American evangelical Christians have been one of Israel’s closest allies for decades, Lynch believes there’s a dangerous ignorance among younger believers regarding Israel.

“What is startling to me is that many Christians cannot articulate their support to Israel other than it’s God’s Promised Land,” Lynch said.

Skip Heitzig, pastor of Calvary Church Albuquerque, joined Lynch for the discussion. He’s visited Israel 41 times and lived there for a short time.

“When God called Abraham … God called him to leave his country and go into a land that He promised. The land happened to be the land of Israel as we know it,” Heitzig explained.

It was the first time Cissie Graham Lynch visited Israel with her father, Franklin Graham, who came to Christ at age 22 in Jerusalem.

A Nation Born in a Day

Israel’s rich history continues to point back to Scripture and this covenant. In fact, the day Israel became a nation — May 14, 1948 — was a modern-day miracle and direct confirmation of a prophecy in Isaiah 66.

Before she was in labor, she gave birth;
Before her pain came,
She delivered a male child.

Who has heard such a thing?
Who has seen such things?
Shall the earth be made to give birth in one day?
Or shall a nation be born at once?
For as soon as Zion was in labor,
She gave birth to her children.
—Isaiah 66:7-8 (NKJV)

Only three years after the Holocaust, the Jews were still reeling from the tragedy. Yet, “That’s when God fulfilled His promise to regather the Jews in their land,” Heitzig explained.

“Four hundred years of slavery, two total destructions, multiple deportations, 2,000 years of dispersion and a Holocaust. And yet, God brings them back into this land, this ancient homeland,” he added.

So why is it critical that Christians support Israel?

Going back to His promise to Abraham in Genesis 12:2-3, God’s plan is to bless the world through Israel. But with that promise comes opposition. That’s why prayer and support for Israel is so important.

“We know Satan; we know the enemy. He comes to kill and destroy. And anything that God chooses, of course, he’s going to do anything in his power to destroy. He will do anything to destroy God’s people,” Lynch said.

“No nation has ever been as harassed, as persecuted, as hated as the Jews,” Heitzig added. “The warfare, the counterattack has been because [the enemy wants to] destroy God’s plan.”

Heitzig notes that supporting Israel “doesn’t mean we support every Israeli policy [or] that we can’t scrutinize decisions.”

“But what we are supporting is the covenant that God made with the Jewish people,” he said.

“In Romans 11, Paul makes it clear that we owe a debt of gratitude to the Jews for our inheritance, our Christian faith,” Heitzig continued. “They gave the precepts of God; they gave the laws of God. They gave us the Messiah. … Because of all that … we have a support for them.”

Learn more about Israel from a Biblical perspective. Watch 7 Days in the Holy Land HERE.

The author of this story, Michael Ireland, is a self-supported media missionary and partner with Metro Voice. Click here to support him as a missionary journalist.  You can also support Metro Voice HERE.