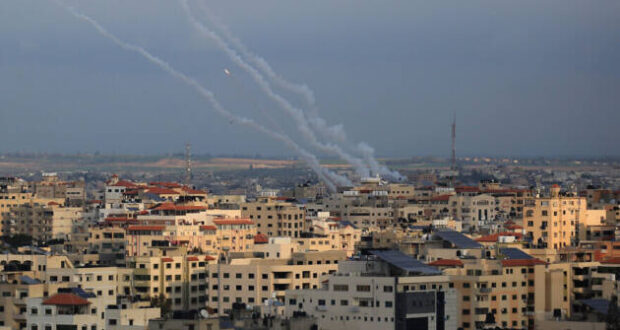 Smoke trails from rockets fired by Palestinian militants in Gaza City, on February 24, 2020. Islamic Jihad militants claimed responsibility for another round of rockets fired towards Israel following a new flare-up between the group and the Jewish state. Israel's army said six "projectiles" had been fired from Gaza, but that its air defense systems had "intercepted five of the launches." Photo by Ail Ahmed/Flash90

After 24 hours of rocket attacks from Gaza, the Palestinian extremist group Islamic Jihad announced a ceasefire with Israel Monday evening. As of Tuesday, it appeared to be taking hold.

The region suffered another two days of violence after Islamic Jihad fired dozens of rockets into Israel from Gaza on Sunday to avenge the death of a terrorist who had been shot dead by the Israeli military after attempting to plant bombs along the Israel-Gaza border early Sunday morning, the military said.

READ: Gaza has only 1000 Christians

A video of an Israeli military bulldozer driving into Gaza to pick up his body quickly went viral on Palestinian social media, sparking anger toward the Israelis.

Following the wave of rockets fired into Israel, which were mostly intercepted by Israel’s Iron Dome missile-defense system, Israeli fighter jets targeted and destroyed dozens of targets in the Gaza Strip and Syria just before midnight on Sunday, aiming for leaders of the Iranian-backed group. Two leaders were killed in one of the overnight strikes.

Islamic Jihad later identified them as Salim Salim, 24, and Ziad Mansour, 23, without disclosing their nationalities or elaborating on their roles.

“Al-Quds Brigades [Islamic Jihad’s military wing] announces that it has finished its military response to the assassination crimes in Khan Yunis and Damascus,” the group said in a statement. “It promises our people and nation that it will continue its struggle and that it will respond to any continued [aggression] by the occupation against our people and land.”

Four other Iran-backed fighters were also killed in the airstrikes, according to the Britain-based Syrian Observatory for Human Rights, reported AFP. It said the attacks were “near the Damascus international airport.”

Monday saw more than 50 retaliatory rockets from Islamic Jihad in Gaza, triggering sirens in southern Israel. Some rockets fell on the local residential communities. A boy walks inside a kindergarten’s playground that was hit by a missile fired from Gaza Strip in the city of Sderot, Israel, Monday, Feb. 24, 2020. (Tsafrir Abayov/AP Photo)

Before the ceasefire, Israeli Prime Minister Benjamin Netanyahu issued a warning to Gaza’s Hamas rulers that he would step-up operations if the rocket fire from Gaza continued.

Musab al-Berim, a spokesman for Islamic Jihad in the Gaza Strip, said the cease-fire went into effect at 11:30 p.m. Monday, several hours after an earlier truce quickly unraveled. He said Egypt and U.N. mediators had negotiated the new deal.

In recent months, Israel has worked with U.N. and Egyptian mediators on a broader informal agreement with the Hamas, the much larger Islamic extremist group that has governed Gaza for more than a decade. These “understandings” have eased the Israeli blockade on the Gaza strip, while Hamas is required in return to guarantee a ceasefire. Israel imposed the blockade after Hamas overran Gaza from the internationally recognized Palestinian Authority in 2007.

“The past 48 hours have once again showed us how fragile the situation in Gaza is. Its population suffers under Hamas’s rule and Israeli closures, while militant activity forces Israeli communities to live in constant fear of the next rocket attack.

“No amount of humanitarian or economic support on its own will resolve either the situation in Gaza or the broader conflict. Gaza ultimately requires a political solution.”

It was the heaviest round of fighting since November when Israel and Islamic Jihad engaged in a two-day battle after Israel killed one of the group’s top commanders.

The latest Israeli airstrikes targeted only Islamic Jihad positions, but Israel holds Gaza’s Hamas rulers responsible for all fire coming out of the coastal enclave. Hamas is much more powerful than Islamic Jihad, and it has shown itself capable of barraging Israel with rocket fire for weeks at a time.