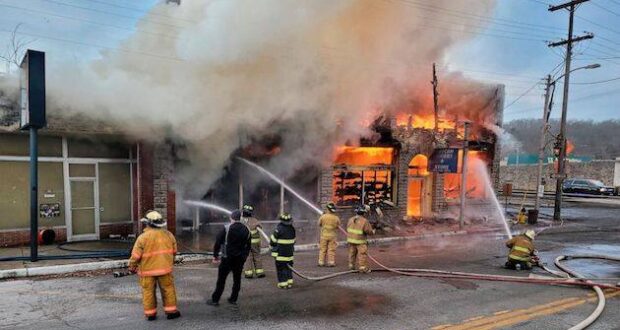 Joplin pitches in to help rebuild mosque after fire

More than $40,000 has been raised to rebuild a mosque in Noel, Mo., that burned in late December. The fundraiser is a joint effort of the Islamic Society of Joplin, the Muslim community in Noel and the Bentonville Islamic Center in Arkansas.

“It’s a great loss,” said Dr. Navid Zaidi, a board member of the Islamic Society of Joplin “We have always been in touch with them, our sister community. We are ready to help in any way we can for immediate relief. We’d like to get them back on their feet and get the mosque going again as soon as we can. We will stand together during this difficult time for them.”

The Joplin mosque also was destroyed by fire in 2012, about a month after the building’s roof was damaged in a suspected arson. While the cause of the Noel fire has not yet been determined, the Joplin fire was ruled an arson, and Joplin resident Jedediah Stout eventually pleaded guilty to the crime and was sentenced to prison in 2016. The Joplin group was able to rebuild the mosque in 2014 from community donations.

“We lost our mosque in an arson in 2012, and it was a great shock,” Zaidi told the Joplin Globe. “We had to do fundraising and eventually build a new mosque, and we hope we’re able to do the same for Noel. When the Joplin mosque was lost, the whole city of Joplin came together for us. And it was not just the Joplin Muslim community, but it was an international effort.”

The initial goal is to collect $100,000 for the mosque in Noel, which was used primarily by Somalian refugees who have settled in the city since 2009. Somalia, a predominantly Muslim country on the east coast of Africa, has been torn by a civil war for decades. The conflict has driven more than a million people from the country.

“We hope that will be enough to get them going,” Zaidi said of the fundraising goal. “We’d like to meet with them to see what the needs are as we go.”

During 2020, over 100 churches and synagogues were burned or vandalized during Black Lives Matter protests across the nation. While incidents involving mosques were rare, this was the second fire involving a Missouri Mosque during 2020.