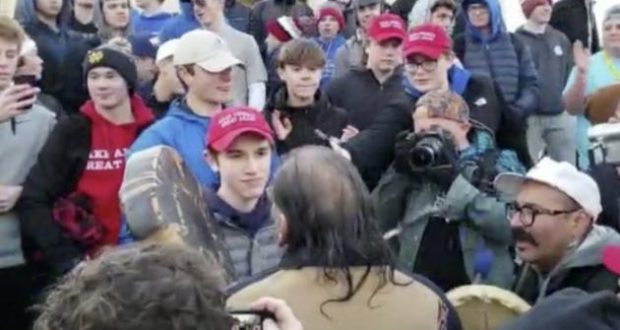 In a blow to the Washington Post and other liberal news outlets, a federal judge has reopened the $250 million defamation lawsuit against the paper by Covington high school student Nick Sandmann.

Sandman, one of the students of Covington Catholic High School who, in January, were confronted by a Native American activist at the Lincoln Memorial, prompting a deluge of media coverage, much of which, Sandmann alleged, was defamatory.

A Kentucky judge had previously dismissed the lawsuit in July on First Amendment grounds.

The suit was first first filed in February by Sandmann’s lawyers, Lin Wood and Todd McMurtr.

Advocates of truth in journalism see the suits as a way to hold the media accountable for an extremely high amount of untruthful reporting, some of it purposeful they say.  The lawsuit seeks $250 million in damages but also hopes to restore some semblance of accuracy in news reporting. Other lawsuits have been filed against CNN and NBC.

U.S. District Court Judge William Bertelsman reinstated part of the lawsuit (pdf), saying he would allow the plaintiff to seek discovery from the Post on three out of its 33 published statements regarding the Jan. 18 incident in Washington D.C. involving the activist, Nathan Phillips. Bertelsman’s new ruling is based on an amended complaint filed by Sandmann’s lawyers.

After a March for Life pro-life event in Washington, Sandmann and other students from Covington Catholic High School in Kentucky were waiting for their bus near the Lincoln Memorial, when they were approached by several Native American activists.

The encounter was extensively covered by media, who used edited video clips that made it appear as though the students were chanting and cheering in mockery of 64-year-old Phillips.

Longer video footage of the incident showed the students began to cheer and chant their school chant to drown out offensive remarks hurled their way by a small group of Black Hebrew Israelites nearby.

Some of the students, including Sandmann, were wearing hats with President Donald Trump’s campaign slogan, “Make America Great Again.”

While Phillips told media outlets that the students had surrounded and harassed him, the footage showed it was he who approached them, inserted himself into their crowd, and, for several minutes, banged a drum within inches of the face of Sandmann, who responded only by standing silently with a smile.

The three published statements in three separate articles in the the Post include Phillips’s view that the teenager deliberately blocked or impeded him when the pair crossed paths at the Lincoln Memorial stairs, reported The Washington Times.

Judge Bertelsman said in an order on Monday: “The Court will adhere to its previous rulings as they pertain to these statements except Statements 10, 11, and 33, to the extent that these three statements state that plaintiff ‘blocked’ Nathan Phillips and ‘would not allow him to retreat.’”

“Suffice to say that the Court has given this matter careful review and concludes that ‘justice requires’ that discovery be had regarding these statements and their context. The Court will then consider them anew on summary judgment,” he added.

Attorney McMurtry said that Bertelsman’s order is a “major victory” for the Sandmann family.

Previous: Missouri attorney general wrapping up criminal referrals for abuse by priests
Next: Bernie Sanders refuses to say how he’ll pay for $32 trillion ‘Medicare for All’