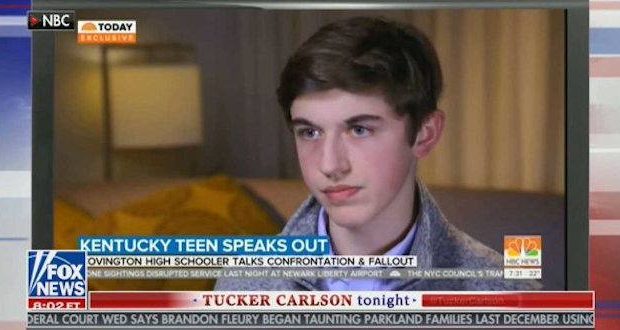 Nick Sandman, wrongly accused in a hyper media, is now suing media outlets to bring sanity back to news reporting.

The attorney, L. Lin Wood, said in an interview with Fox News host Mark Levin, which will air on Sunday, March 10, that they will be filing the lawsuit next week on Monday or Tuesday.

“CNN was probably more vicious in its direct attacks on Nicholas than The Washington Post. And CNN goes into millions of individuals’ homes, it’s broadcasted into their homes,” Wood told Levin.

Sandmann was at the center of a slew of news stories claiming that he and other students harassed Native American and anti-President Donald Trump activist Nathan Phillips, triggering a number of threats against the students.

An edited clip showed one student, Nick Sandmann, standing still and smiling while a Native American man, Nathan Phillips, drummed and chanted in his face.

“They were after him and I said they woke up on Saturday morning and started throwing punches. The CNN folks were online on Twitter at 7:00 a.m. retweeting the little one minute propaganda piece that had been put out by [political activist group] 2025.”

Wood said he plans to find out who was behind the original release of the video of Sandmann and the other students.

“They’re out there right away going after this young boy. And they maintain it for at least two days,” he said.

“Why didn’t they stop and just take an hour and look through the internet and find the truth and then report it? Maybe do that before you report the lies. They didn’t do it. They were vicious. It was false. CNN will be sued next week and the dollar figure in the CNN case may be higher than it was in the Washington Post.”

“Now you say you’ve seen the tape, if you took the time to look at the full context of what happened that day, Nicholas Sandmann did absolutely nothing wrong. He was as I’ve said to others, he was the only adult in the room. But you have a situation where CNN couldn’t resist the idea that here’s a guy with a young boy, that ‘Make America Great Again’ cap on. So they go after him,” he added.

Wood said the $250 million dollar amount was determined by a combination of $50 million in reputational damage and $200 million in punitive damages.

“I expect because of the way they went after Nicholas so viciously that the claim for his reputational damage will be higher than it was against the Washington Post. The Post was $50 million for the reputational damage and we can discuss why that figure, $200 million in punitive damages,” Wood told Levin.

Wood said punitive damages are designed to punish and deter the alleged actions of the defendants.

“Don’t ever do this again. I would think the punitive damage award against CNN that we’ll seek will be at least the same $200 million as it was against the Washington Post. But the compensatory damage to Nicholas’s reputation, that number I expect will be higher.”