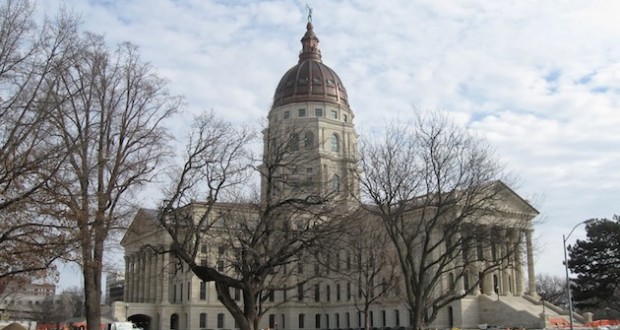 Kansans are set to see a decrease in sales tax they pay on groceries. The savings are part of legislation approved by the Republican-controlled Kansas House and also includes income tax relief proposals.

The vote came Friday with a margin of 76-43 with most Democrats voting against the measure.

The goal of the legislation is to prevent individual taxpayers and businesses from paying more state income taxes because of changes in federal tax laws at the end of 2017.

But the measure also would drop the sales tax on groceries by about 15 percent from 6.5  to 5.5 percent.

One of the reasons for the sales tax reduction is that communities along Kansas’ borders lose business when residents cross state lines to save money on groceries.

“Sometimes, it is worth it to make the trip when they save a significant amount of money,” Rachel Henderson, general manager of the Marmaton Market in Moran, said. “The overall impact of this habit is huge.”

“Our community misses out on any tax revenue, and it hurts business when we have to compete with a lower sales tax,” Henderson said.

According to the report by Wichita State each percent increase in the tax, (assuming surrounding counties have a lower food sales tax), results in $101 drop in food sales per capita.

“This is a tax burden that Kansans shouldn’t have to bear,” Henderson said. “If you aren’t wealthy enough to make regular trips to the city for groceries, you are forced to have a reduced budget for food.”

Of the 105 counties in the state of Kansas, 35 share a border with at least one other state, according to the Wichita State report.

A bigger reason may be that sales tax on food is considered the most regressive of all taxes, since it affects the less affluent most of all.

New Governor Laura Kelly was elected after making lowering the sales tax on food a campaign issue. However, her first budget does not contain lowering that tax.

“If there is one thing that Senator (Carolyn) McGinn (R-Sedgwick), (Rep.) Tim (Hodge) (D-North Newton) and I all agree on is that we can do better with food sales tax,” said Rep. Steven Owens (R-Hesston) during a legislative breakfast March 2 in Newton. “There is no question. It was not in the governor’s budget, and so be it. Hopefully we can make some headway on that.”

Hodge has twice campaigned on the issue, and has supported an amendment to a tax bill this year that would reduce the sales tax on groceries by one cent. He said March 2 he was disappointed that a reduction of the sales tax on food did not appear in the governor’s budget.

“That is a big disappointment for me,” Hodge said. “I think we get something there this session and if not this session, next session. It needs to happen. We can not put the cost of government on the least of these. It is not right, it is not fair, it is not Christian — choose your adjective. It is not right. … It is as regressive as all get out.”

McGinn is working on a budget as well while serving on the Senate Budget Committee — and believes that Kelly looked at other priorities — like increasing funds to education and other programs — before reducing the sales tax on groceries.

“I think it was switched for other priorities that she is trying to get going forward in her first year,” McGinn said.

The Senate approved the bill last month but without the sales tax provisions. Senators expect to decide next week whether to accept the House’s changes or force negotiations.

Republican leaders contend the bill prevents a tax increase but are also dealing with a budget deficit.