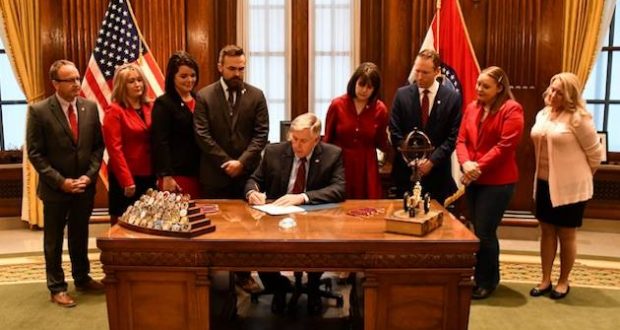 Governor Mike Parson has signed the “Missouri Stands For the Unborn Act,” bill. Pro-life organizations say this is groundbreaking legislation that will save lives and set the standard for pro-life legislation nationwide.

The Senate approved the bill in a 24-10 vote and the House put the finishing touches on the bill last week and now the bill to ban abortions after unborn babies have detectable heartbeats becomes state law. HB 126, the strongest pro-life bill in Missouri history, will:

The Missouri health department indicates 3,903 babies were killed in abortions in the state in 2017 and 119 of those were babies killed after 20 weeks.

The pro-life bill provides protections for unborn babies in a wide range of scenarios, while taking into account court rulings like Roe v. Wade that restrict states from protecting the unborn. The bill bans abortions after eight weeks of pregnancy, with exceptions for medical emergencies. Abortionists who violate the measure could be punished with up to 15 years in prison. Women are excluded from prosecution.

It also includes a provision that would completely ban abortions once Roe v. Wade is overturned. Additionally, the bill has measures that would prohibit unborn babies from being aborted up to various limits between 14 weeks and 20 weeks if courts strike down the eight-week ban.

Missouri Right to Life said after the bill signing, “We thank the Missouri House and Senate for their commitment this session to increase protections to both born and unborn children and their parents. We thank Governor Parson for his strong commitment to pro-life legislation and leadership in helping to pass these two important pro-life bills.”

The bill declares the state of Missouri and all its political subdivisions a “sanctuary of life” and bans discriminatory abortions for reasons of sex, race, or Down syndrome, it requiring abortionists to have adequate malpractice insurance, and more. The bill now returns to the House for final approval.

The bill also would protect unborn babies by banning discriminatory sex-selection abortions and abortions because the unborn baby may have Down syndrome. It also includes expanded tax credits for donations to pregnancy centers. Additionally, it requires that a minor notify both parents before she has an abortion.

However, pro-abortion Democrats slammed the bill as “extreme” during the Senate debate.

“So much of this bill is just shaming women into some kind of complacency that says we are vessels of pregnancy rather than understanding that women’s lives all hold different stories,” state Sen. Jill Schupp said.

She criticized the bill for not allowing exceptions for unborn babies conceived in rape.

“Who knows what will happen to the young girls of this state should this law move forward and prevent those who are already victims,” Schupp said.

Pro-life Republicans defended the bill as life saving. The abortion industry is expected to challenge the legislation if it passes, but state Attorney General Eric Schmitt said he will defend the unborn in court, KSMU reports.

Meanwhile, Vermont passed a radical pro-abortion law this week that creates a “right” to abort an unborn baby for any reason up to birth. Rhode Island lawmakers narrowly defeated a similar bill this month.