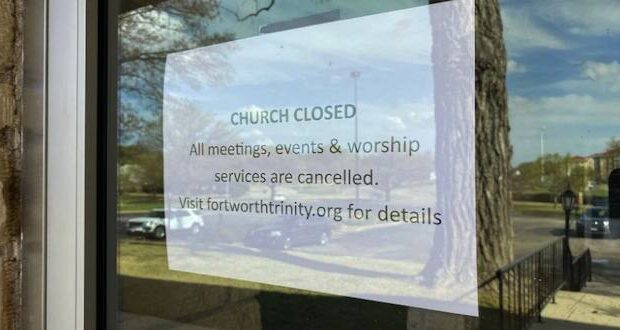 A Fort Worth church has closed after a member tested positive.

Neither Missouri’s health director nor local health agencies’ directors can use “personal discretion” when imposing orders or mandates that impact businesses, individuals, schools, and other entities, a Cole County judge said this week.

The COVID-19 pandemic ignited a fierce debate in Missouri over local control and the powers local governments or health agencies have to mandate masks, closures, or capacity limits. The lawsuit and subsequent judgment from Judge Daniel Green, underscored the debate Tuesday.

At issue is the Department of Health and Senior Services’ regulations which allow the state director and directors of local health agencies in the state to implement “control measures,” such as the closing of a school or public place of assembly, in the interest of protecting public health.

Green’s judgment found the regulations were unconstitutional and invalid and instructed the secretary of state to remove them from the registrar. He also said local health agencies’ orders “based on the opinion or discretion of an agency official without any standards or guidance” are “null and void.”

“This case is about whether Missouri’s Department of Health and Senior Services regulations can abolish representative government in the creation of public health laws, and whether it can authorize closure of a school or assembly based on the unfettered opinion of an unelected official,” Green’s order said. “This Court finds it cannot.”

“DHSS regulations break our three-branch system of government in ways that a middle school civics student would recognize because they place the creation of orders or laws, and enforcement of those laws, into the hands of an unelected administrative official.”

A spokesperson for DHSS did not immediately respond to a request for comment.

The lawsuit against DHSS was brought by Shannon Robinson, Satchmo’s Bar and Grill, and Church of the Word who argued the regulations allowed local health agencies “to exercise unbridled and unfettered personal authority to in effect, legislate.”

“A local health agency director is constitutionally prohibited from exercising discretion to issue generally applicable rules prohibiting or requiring certain conduct and disciplinary consequences for violations of the directors’ unilaterally created rules. Yet, this has been happening across the state for over 18 months, thanks to unconstitutional language buried in state regulations,” Green’s judgment said.

The judgment said health orders during the pandemic, such as mask mandates in schools or the shuttering of businesses, have varied by county — thus impacting individuals differently based on where they reside. Some orders have also gone into effect without public comment, according to the order.

“The result is tyranny, and it is over. It is time for our businesses, schools, and residents to embrace the freedom that this decision provides. It is time to make masks optional, end needless quarantines of Missouri’s children, and go back to living productive lives while allowing individuals the freedom to choose how and when they interact with others based on each person’s or family’s personal decisions,” Brown said.

Satchmo’s Bar and Grill was shut down in December 2020 for noncompliance with St. Louis County’s health orders.

“It is an exciting, momentous occasion in our state,” said Robinson, leader of St. Louis County Supporting Kids and Community. “Missouri can return to the constitutional principles of a three-branch system: executive, judicial, and legislative. It is high time for our executive branch to stay in its lane and stop acting as a legislative branch.”

The crescendo of Missouri Republicans concerned about the impact of local public health orders culminated in a new state law this year that set time restrictions on how long certain orders can remain in place without approval by a local governing body.

When he signed the legislation into law, Gov. Mike Parson said it would require more transparency in local public health orders.

As Green noted in his judgment, other states have seen similar health mandates thrown out in court.

Earlier this month, a Pennsylvania court said the acting health secretary did not have the authority to implement a statewide mask mandate. (The order remains in place while the state appeals.)

Previous: How Communism (yes, Communism) almost ruined the first Thanksgiving
Next: Target joins growing number of retailers that will be closed on Thanksgiving