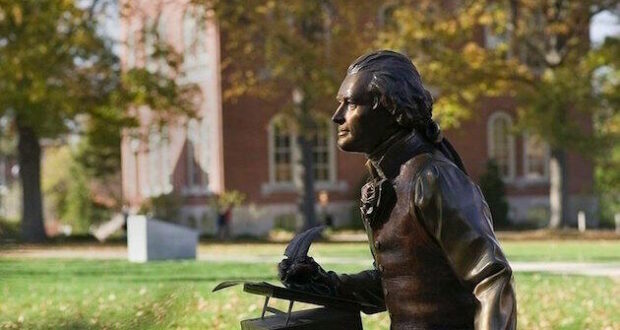 MU will keep Thomas Jefferson statue after calls to remove it

A statue of Thomas Jefferson will remain on the Campus of the University of Missouri in Columbia.

That’s the recommendation of a task force in response to cancel culture calls to have it removed. The panel has also included in its report that a sign describing Jefferson’s shortcomings as well as accomplishments as a founding father should be placed next to it.

The sculpture, which sits on the Francis Quadrangle (“The Quad”) on Mizzou’s campus. was originally created by artist George Lundeen.  It was meant to celebrate Jefferson’s work in establishing public education in the young nation which eventually led to the creation of the University of Missouri – the first public university in the Louisiana Purchase territory.

After calls arose in 2020 to remove the statue, the task force was formed by the UM System President and MU chancellor Mun Choi in July 2020.  Opposition to the statue gained momentum on campus after a petition was launched online to have it removed. Choi met with leaders of the movement but insisted the university would not remove the statue. Curators later met and confirmed Choi’s decision.

Kansas Citian and MU sophomore Roman Leaphear spearheaded the effort to ditch Jefferson.  “I just hope they’re moving in the right direction for everybody,” Leapheart told a Columbia newspaper.

While the MU Black Faculty and Staff Organization also worked to remove the statue, the MU Legion of Black Collegians is taking a more cautious approach saying they needed more information about the decision before making a statement.

The recommendation includes incorporating a “wayside sign” detailing Jefferson’s biography, including the fact that he owned as many as 600 slaves and fathering a child with one of them. The sign would also list Jefferson’s numerous achievements such as helping to formulate what would become modern democracy.

Part of the text would include the wording: “Jefferson later fathered six children with Sally Hemings, one of more than 600 people he enslaved throughout his life, and instigated policies that led to the forcible removal of indigenous peoples from their ancestral lands.”

Previous: C5Alive Topeka POWER Luncheon will be “Business Matchmaker”
Next: DOJ: It was Facebook, not Parler, that fueled capitol riot