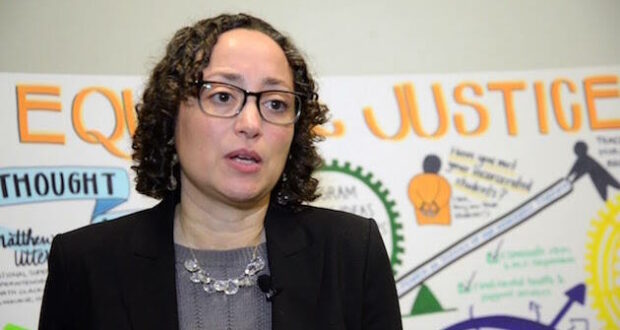 Christian groups are concerned about the Biden administration’s new assistant secretary for civil rights at the U.S. Department of Education. She has a well-documented history of strong-arming schools over transgender bathroom policies and faith-based organizations fear she’ll do the same to them.

Lhamon also served as assistant secretary for civil rights during the Obama administration and then as chair of the U.S. Commission on Civil Rights. During her tenure, she wrote a letter telling public schools they were in violation of federal law if they prohibited students from using the restroom or locker room that matched their gender identity. The Obama rule, for example, permitted a biological boy who identifies as a girl to use the girls’ locker room and bathroom. Schools also were considered in violation of federal law if they prohibited transgender-identifying students from playing on the gender-specific sports team of their choosing.

What’s more, she even said it was illegal to have special restrooms just for transgender students which many schools adopted to protect female students.

“A school may not require transgender students to use facilities inconsistent with their gender identity or to use individual-user facilities when other students are not required to do so,” she wrote.

Additionally, Lhamon was slow to approve, and she even resisted exception requests by religious colleges and universities who wanted to follow their beliefs on LGBT and gender issues. Alliance Defending Freedom was critical of the Biden administration for nominating her. General counsel Kristen Waggoner called her a “far-left activist.”

“During her time in this position under the Obama administration, Ms. Lhamon led the charge on policies that allowed males to enter girls’ private spaces, violated the free speech and due process rights of students and encouraged harassment of religious schools,” Waggoner wrote. “Now that she is back in this role, ADF will be watching closely to see if Ms. Lhamon decides to pick up where she left off. If she, or any government official, attacks the fundamental freedoms of students and religious schools, ADF will remain steadfast in our commitment to advocate for safety and equal opportunities for women, free speech and religious liberty.”

The Biden administration is currently facing a lawsuit from College of the Ozarks in Missouri over new transgender rules. The requirements for Christian colleges to put biological boys in female dorms, locker rooms and restrooms.

Lhamon is perhaps most well known and disparaged by critics for implementing the 2011 Title IX standards for investigating and adjudicating college sexual misconduct and assault cases. Under her leadership, male college students were stripped of due process in court proceedings dealing with sexual harassment and assault.