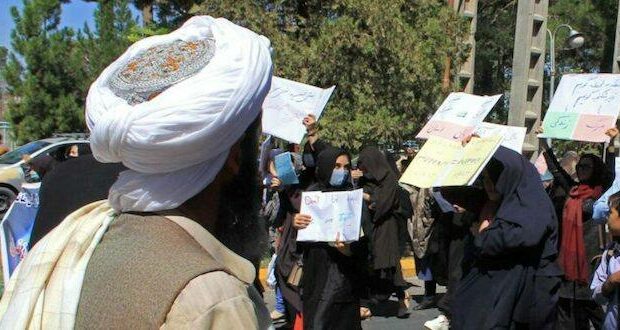 In a rare instance of defiance, Afghan women protest for their rights in view of the Taliban. Photo: video screenshot.

International Christian Concern and Gospel for Asia are among groups calling followers of Christ to urgently pray for Afghanistan and especially its underground Christians.

The plea comes as almost 300,000 Afghan refugees make their way towards the borders of neighboring countries and many of those left behind face rape and execution at the hands of the Taliban. Hundreds of thousands of others, including Americans, female college students, women in business or civil service such as judges, and anyone who helped the United States in its 20-year war, remain in hiding.

News reports say the Taliban is searching door-to-door and killing anyone on the spot.

ICC, which monitors persecution around the world, says the future of Christians in the country looks bleak.

It is unknown how many Christians live in Afghanistan, although some estimates put the number between 10,000 and 12,000. There could be tens of thousands more who have not made their profession of faith known to family or friends. Most of them are converts from Islam – a fact that makes them targets for persecution by the Taliban. Under Taliban ideology, the punishment for conversion to Christianity is death. “We encourage you to pray that Christians would not be overcome by fear,” the organization said. 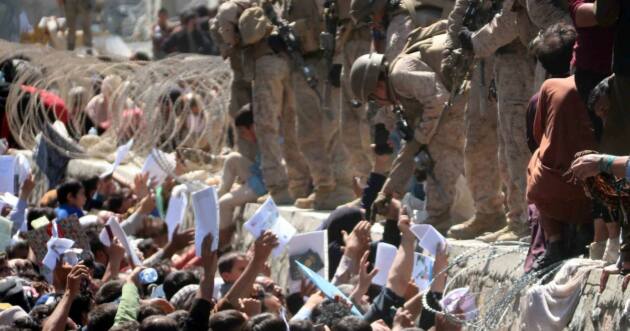 One of the world’s largest mission organizations, Gospel for Asia (GFA) says Christians cannot carry on “like normal” while people in Afghanistan face the terror of Islamic Jihad.

“I pray that no church in the world worships and prays like it’s just another normal day over the coming weeks while the innocent in Afghanistan await the Taliban’s knock on their door,” said K.P. Yohannan (Metropolitan Yohan), founder of GFA World, a Christian organization that helps millions of vulnerable people globally.

After the bungled U.S withdrawal that saw desperate Afghans fall to their deaths from transport planes land 13 U.S. service members killed, Yohannan pleaded with people to “pray and fast” for the desperate situation.

“I can tell you now that many innocent people, including Christians, are likely going to die very soon in Afghanistan — and in other countries — at the hands of emboldened terrorists,” he said.

“These precious men, women and children need our prayers more than ever before.”

And it’s already begun. The Taliban has instituted their version of Islamic law that forbids singing and public music. This week they executed Afghan’s most famous folk singer, compared by some to U.S. singer John Denver.

But it is the population of Christians that faces imminent genocide.

According to reports, the Taliban are going door-to-door, hunting for Christians as well as Afghans who’ve assisted the United States. Males face execution on the spot, while women are raped and girls taken and forced into sexual slavery.

“Every Muslim-background believer like myself that converted to Christianity, he knows the consequences of their conversion,” that Christian said. “Islam is very clear. Quran is very clear, Hadith is very clear for the apostasy. They give three days after that, if they don’t repent … there is no mercy on those people.”

Even before the United States announced its withdrawal, Afghanistan was a dangerous place for Christians, with Open Doors ranking it No. 2 on its world watch list ranking of nations where believers face the most persecution. When the list was released, the Taliban controlled only certain parts of the country. Now, though, the Taliban controls the entire nation.

“All the Afghan people — not only Christians — are living in a theater of fear,” Yohannan said. “I just heard first-hand reports that many people — and entire families — have been wandering in the desert wilderness for over a week, desperate to escape the country.”

“Many in Afghanistan genuinely fear they will not see tomorrow,” Yohannan said. “The knock on their door could be the last they hear.”

“None of us should be acting like life is ‘normal’ while our brothers and sisters in Afghanistan wait in dread for the Taliban to come to their door. God moves when we choose to enter into the suffering of others. We need to be on our knees in prayer now.”

“Please pray for the Christians in Afghanistan who have been obeying Christ’s Great Commission out of love for the lost people in Afghanistan,” tweeted Bryant Wright, president of SEND Relief of the Southern Baptist Convention. “It doesn’t sound like our government has remembered them. Let’s at least pray for their strength and courage as they give their lives for Jesus!”

Previous: Are sex and gender the same thing?
Next: Chromebook dropped from ‘dirty dozen’ list for sexual exploitation