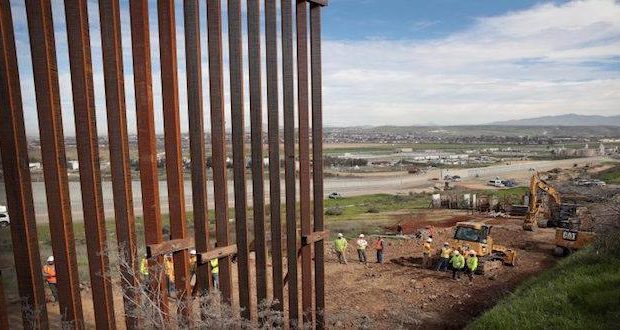 Mile by mile, dollar by dollar, the security wall on the nation’s southern border is being built in defiance of Democrats in Congress. By the end of the year, 400 miles will have been constructed or reinforced. Now, construction is expected to accelerate at a more rapid pace with new funding from the Pentagon.

Defense Secretary Mark Esper on Tuesday, Sept. 3 approved the move of $3.6 billion from Defense Department funds for military construction projects toward building some 175 miles of wall along the U.S.-Mexico border in 11 wall projects.

Pentagon officials said half the money will come from military projects in the United States and the rest will come from projects abroad that are not crucial to the functioning of the military. They have not said which of the 127 military construction projects will be affected but said that further details will be available on Wednesday after members of Congress are notified about the move, the Associated Press reported.

In a letter from Esper to the Senate Armed Services Committee, Esper noted that President Donald Trump had issued a proclamation on Feb. 15 declaring a national emergency on the southern border that requires the use of armed forces.

“I have determined that 11 military [wall] construction projects along the international border with Mexico, with an estimated total cost of $3.6 billion, are necessary to support the use of the armed forces in connection with the national emergency,” Esper wrote in the letter obtained by CNN.

“These projects will deter illegal entry, increase the vanishing time of those illegally crossing the border, and channel migrants to ports of entry,” Esper wrote. “They will reduce the demand for [Department of Defense] personnel and assets at the locations where the barriers are constructed and allow the redeployment of DoD personnel and assets to other high-traffic areas on the border without barriers.”

“In this respect, the contemplated construction projects are force multipliers,” the letter reads.

“Accordingly, I have authorized and directed the Acting Secretary of the Army to undertake these 11 projects expeditiously and … to do so without regard to any other provision of law that may impede the expedition construction of such projects in response to the national emergency.”

Securing Funding for the Border Crisis

Since taking office, Trump has demanded that Congress fund construction of a security wall on the southern border—his landmark campaign promise and an issue that Americans overwhelmingly support. Democrats, whose votes are needed to reach the 60-vote threshold in the Senate, have thwarted all attempts, even against the will of many of their own constituents.

In December, when the president stood by his campaign promise and refused to sign the spending bill that arrived on his desk withholding funds for a border wall, Congress missed a deadline to fund the government, triggering a partial shutdown. The shutdown stretched on for 35 days, between Dec. 22 and Jan. 25, the longest in United States history.

On Feb. 14, after a protracted political battle, Congress and the president approved $1.375 billion for construction of “primary pedestrian fencing” along the border in southeastern Texas. It was well short of Trump’s demands, but the president signed the funding, saying that he would get the money another way to address the humanitarian crisis on the southwest border.

Trump then declared a national emergency on Feb. 15. The move enabled him to redirect Department of Defense funds, beyond what Congress approved, toward building the U.S.-Mexico border wall.

Trump enabled the transfer of $3.6 billion from the military construction budget toward wall construction. The president also ordered the shifting of an additional $3.1 billion, which did not require declaring a national emergency: $2.5 billion was transferred from Defense Department counterdrug activities and $601 million from the Treasury Department’s asset forfeiture fund.

On March 14, the Senate passed a privileged resolution to terminate Trump’s national border emergency declaration. Trump then used his veto power for the first time in his presidency on March 15 to override that congressional resolution. Later, on March 26, the Democratic-led House tried but failed to override Trump’s veto. At that point, the White House had secured $8.1 billion toward border wall construction.