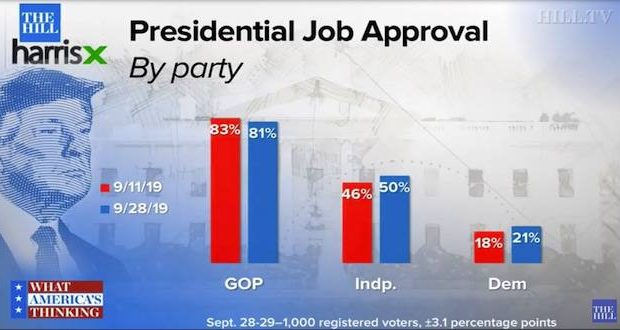 While Democrats ramp up efforts to impeach President Donald Trump, a September Gallup poll and new Harris poll may give them pause as his approval rating skyrockets.

A Harris poll released today shows that the President’s approval rating has shot up to 49% even after impeachment attempts. Republicans are now joined by a majority of Independents now supporting the President. Support for Trump among Democrats remains low but has also ticked up after impeachment efforts were announced.

With the new polling, Trump’s numbers would rival those of America’s most popular presidents of the last half-Century at this point in their presidencies.

Today’s poll has political commentators reeling after wall-to-wall negative reporting on the President and impeachment efforts have only increased Trump’s popularity.

Democrats have admitted publicly, and on camera, that the goal of impeachment is to prevent Trump from being re-elected which according to polls looks likely. 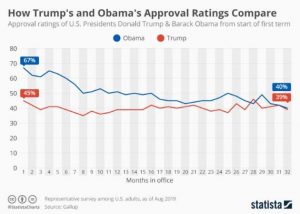 Rep. Al Green (D-Texas) was defending his support for impeachment despite the practical political implications of such a controversial act by Congress, when he revealed the reasoning behind his advocacy.

“He will say the Democrats had an overwhelming majority in the House and didn’t take up impeachment,” he continued. “He will say we have a constitutional duty to do it if it was there and we didn’t. He will say he’s been vindicated.”

“In other words, Dems can’t win the election fairly. You can’t impeach a president for creating the best economy in our country’s history,” he responded.

Rep. Green said in his tweet that he was being misquoted.

This chart shows the development of approval ratings for U.S. Presidents Barack Obama and Donald Trump from the start of their first term in office.

Similarly giving Democrats pause, President Trump’s current approval rating is higher than all presidents at their lowest points for the last 65 years with the exception of Presidents Eisenhower and Kennedy.

Previous: New Center for Biblical Studies opens at Midwestern Seminary
Next: “Judy’ reveals there was no yellow brick road for actress