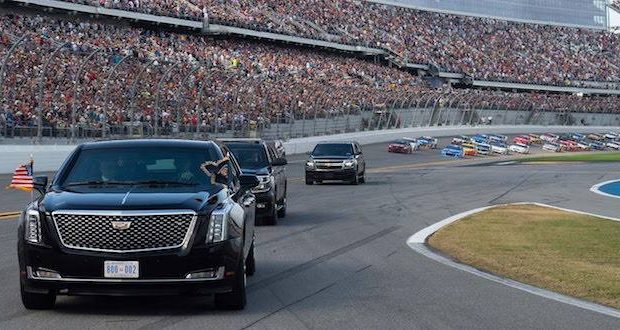 Over 100,000 people in attendance at the  Daytona 500 on Sunday were witness to history as President Donald and Melania Trump kicked off the event. Trump is the first president to be asked to serve as grand marshal. The “Beast”, the nickname for the presidential limo, served as the honorary pace car.

“Daytona International Speedway has been privileged to have hosted several sitting Presidents of the United States over our history,” Daytona International Speedway President Chip Wile said in a statement on Thursday. “We’re honored that the President of the United States has chosen to experience the pageantry and excitement of ‘The Great American Race’ by attending Sunday’s 62nd annual DAYTONA 500.”

VIDEO: Airforce One flies over Daytona 500

The President saw many friendly faces and signs at the race, with some eager fans camping out for days in the infield wearing shirts with Trump 2020 logos. Multiple RVs displaying Trump 2020 signs could also be seen parked at the speedway on Saturday.

Trump is the second sitting US president to attend the Daytona 500 but the first to serve as grand marshal. Then-President George W. Bush attended in 2004. The President has a close relationship with Roger Penske, a race car team owner, former professional race car driver and entrepreneur.

Trump gave Penske the Medal of Freedom last year and separately held a reception for Penske’s racing team at the White House for their Indianapolis 500 win. He’s also hosted the 2017 and 2018 NASCAR champions at the White House.

The NASCAR race in a swing state is the latest in a line of appearances and ad buys at professional sports events over the last few months.

The Trump campaign announced this week it would air a television ad during the broadcast of the race on Fox Television touting what it calls the President’s record of accomplishments for Americans on the economy, border and national security, and on helping veterans.

“NASCAR fans are patriots who support the President in huge numbers, so we definitely wanted to communicate directly with them about Keeping America Great during the Great American Race,” Brad Pascale, Trump’s campaign manager, said in a statement.

Latest polls show Trump at his highest approval since becoming president with his numbers also higher than other presidents in the fourth year of their term.

Previous: Biological male to compete as woman in USA Olympic trials
Next: Former presidents share their thoughts on the central role of faith