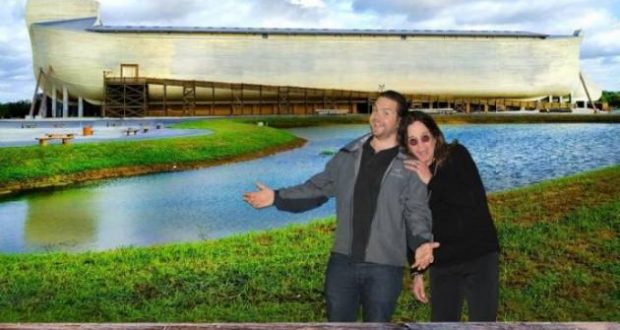 Ozzy Osbourne and son, Jack take the traditional photo commemorating their visit to a tourist attraction.

Staff at the Ark Encounter in Kentucky had a chance to share a Biblical view of creation with Black Sabbath frontman Ozzy Osbourne and his son, Jack. The pair visited The Ark Encounter as part of their TV show “Ozzy and Jack’s World Detour.”

“My people will never believe it,” Ozzy quipped on his show as he and Jack drove through Grant County.

When arriving at the Noah’s Ark replica, the two made some remarks on the enormity of the Bible figure’s task of building the ark.

“How did Noah keep a T-Rex in a cage?” Ozzy genuinely inquired. 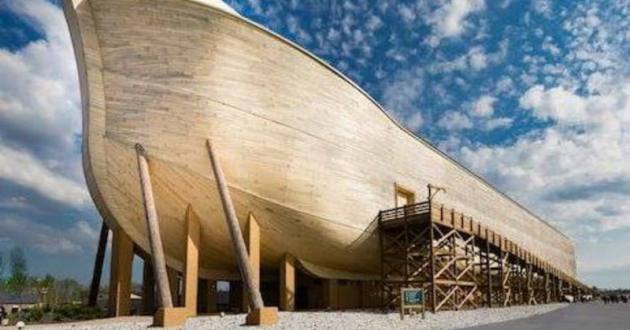 “You know, I’ve thought long and hard about this and I figured it out,” Jack responded. “T-Rex had little tiny arms. They can’t pick locks.”

The apologetics ministry behind The Ark Encounter, Answers in Genesis, confirmed that the controversial Black Sabbath rock star was in fact at its site in an attempt to restore his relationship with his son.

“The A&E Channel is airing ‘Ozzy and Jack’s World Detour,’ featuring rock-and-roll legend Ozzy Osbourne and his son, Jack, as they travel the world and attempt to re-connect as father and son. They have visited places like Stonehenge in England, the Alamo in Texas, and Mt. Rushmore in South Dakota. Earlier this year, their producers inquired about filming at the Ark, and we gave our OK, especially since we were assured that the segment would not turn into a hit piece. Ozzy and Jack visited the Ark with their film crew in April, and the segment aired nationwide on A&E November 29,” the group shared on its website.

Sharing a Biblical Message with Osbourne

According to the site officials, the Ark Encounter welcomed the unorthodox pair in hopes of sharing its version of biblical teaching with the Osbourne family.

“We wanted them to be exposed to our Bible-based teachings, including the gospel message. Now, because of his wild reputation and frequent use of profanity, we did urge viewer discretion when we announced that the Ark segment with the Osbournes was going to be aired,” Answers in Genesis stated.

Answers in Genesis President Ken Ham also confirmed the visit with a tweet.

According to Faithwire, staff members of the museum shared some more things the father and son said during the taping.

“On the TV program that aired, you can hear them saying things like, ‘Wow, wow, VERY wow.’ And ‘that is insanely big.’ Plus, ‘absolutely unbelievable,'” the workers said.

The Ark attraction opened its doors to the public in July 2016. Featuring a five-story, 510-foot-long Ark, the theme park exceeded their business goals within the first couple of months. Ham has always said that he wants people of all beliefs to visit the Ark Encounter with open minds, regardless of their faith.