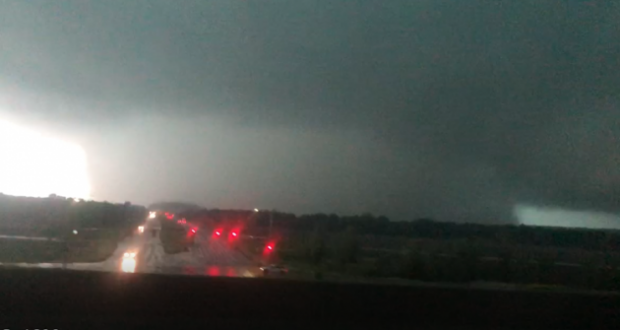 One or more massive tornadoes have touched down in the southwestern suburbs of the greater Kansas City area Tuesday evening. A Tornado Warning has just been issued for Kearney, Mo.

New reports say that debris continues to fall out of the sky up to 60 miles away.

The National Weather Service office in Kansas City stated a large and dangerous tornado was on the ground on the western edge of Kansas City, Kansas, and urged residents to take shelter.

Most damage seems to have occurred in the area around Lawrence, Kan. with damage stretching into Bonner Springs and Wyandotte County.

First responders report damage in a wide swath with some accounts of damage at Kansas City International Airport. One TV station reported that if the storm had remained at full strength  and not dissipated, the tornado could have passed close to the downtown loop.

Weather services have issued a Tornado Warning  for Liberty, Mo. and surrounding communities.

More storms, including tornadoes can be expected tonight according to the National Weather Service and local television news stations. A tornado watch remains in effect until 10 p.m.