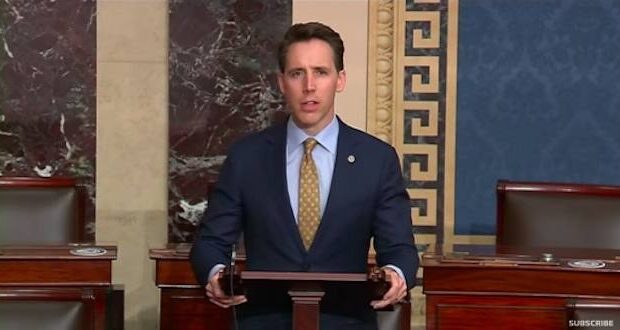 Missouri Sen. Josh Hawley appearing on a list of potential Supreme Court nominees continues to cause buzz across the country.

“Four years ago, I announced my first list of highly qualified candidates and promised to fill Justice Scalia’s vacant seat from among those names,” said Trump.

“And just days after my inauguration I kept that promise when I nominated Judge Neil Gorsuch, and, as you know, he has been very spectacular,” said Trump.

However, the state likely won’t be in the market for a new senator any time soon. Hawley said he would decline the nomination, “The Hill” reported.

“I appreciate the president’s confidence in listing me as a potential Supreme Court nominee,” Hawley tweeted/ “But as I told the president, Missourians elected me to fight for them in the Senate, and I have no interest in the high court. I look forward to confirming constitutional conservatives.”

Hawley was one of three sitting GOP senators on the shortlist, along with Sens. Ted Cruz (R-Texas) and Tom Cotton (R-Ark.) Hawley clerked for Chief Justice John Roberts after graduating from Yale Law School.

Hawley made the comments after saying in July that he would only vote to confirm nominees to the high court who believe Roe v. Wade was “wrongly decided.”

“I don’t want private assurances from candidates,” he said. “I don’t want to hear about their personal views, one way or another. I’m not looking for forecasts about how they may vote in the future or predications. I don’t want any of that. I want to see on the record, as part of their record, that they have acknowledged in some forum that Roe v. Wade, as a legal matter, is wrongly decided.”

“I will vote only for those Supreme Court nominees who have explicitly acknowledged that Roe v. Wade is wrongly decided. By explicitly acknowledged, I mean on the record and before they were nominated,” Hawley, who has not yet had the opportunity to vote on a nominee to the high court since his election in 2018, told The Washington Post.

A Hawley nomination, and confirmation, could transform the court for fifty years because of his age. Hawley, while a constitutional scholar and former State Attorney General, is 40 years old. The oldest person to serve as a Supreme Court Justice was Justice Oliver Wendell Holmes, Jr., (1902-1932) who was 90 when he retired from the Court.

If Hawley were to become a Justice, the conservative Christian could potentially serve through 12 presidencies well into the closing decades of the 21st Century.

Previous: Will believers continue to sit back and just take this cultural upheaval?
Next: Mike Pence shares he was once a Democrat but left over pro-life issues