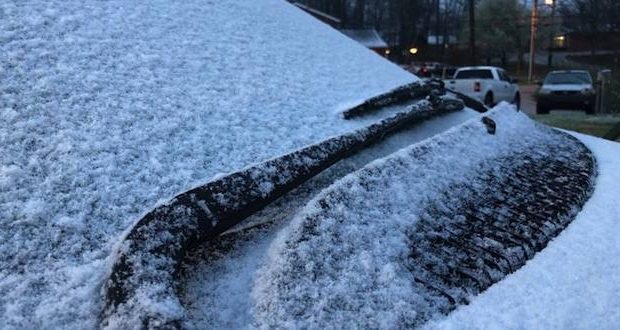 Snow forecast for parts of area this weekend

Local forecasters say it could happen again Sunday as a cold front moves through the area bringing the coldest temps of the fall so far. A Winter Weather  Advisory has been issued for parts of the area for the first time this fall.

Snow is possible in the north and western suburbs of the city Sunday afternoon and evening with accumulation possible in counties north.

After a wet week rain, Sunday will bring wind and cold during the afternoon and be accompanied by falling temperatures throughout the day. Some snow will be possible in northwest Missouri where a dusting is possible. The best chance for snow in the metro will be in the evening hours.

The windchill is expected to be in the low 30s.

For areas west and northwest, it will be white. The National weather Service located in Pleasant Hill, MO has issued a winter weather advisory wtih snow accumulations forecast for Sunday generally along and north of a line from Abilene to Holton, Kansas. Snow accumulations of 1 to 3 inches is possible across far north central Kansas including Topeka.

Any accumulations could result in some slick road conditions.

A hard freeze is forecast for Monday and Tuesday morning over all of north central, northeast and east central Kansas and northwest Missouri including parts of Kansas City with lows falling into the middle 20s and lower 30s. These temperatures are likely to kill sensitive vegetation.

For Tuesday widespread temperatures are expected to drop below freezing, which will cause damage to outdoor plants.

Previous: Advice and aid wants to save the next life
Next: Polio-like disease hits the area