Home / News / Columns / Who will redress my grievances? 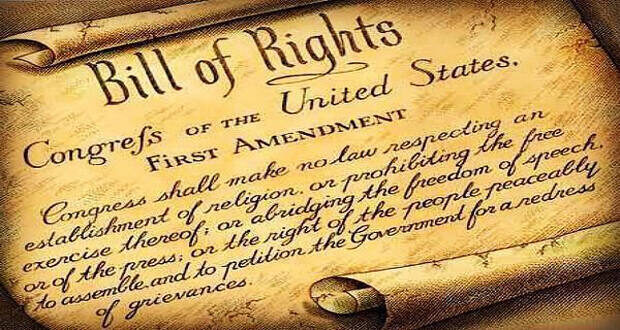 Congress shall make no law respecting an establishment of religion, or prohibiting the free exercise thereof; or abridging the freedom of speech, or of the press; or the right of the people peaceably to assemble, and to petition the Government for a redress of grievances.

Despite how they have brainwashed you in the government schools there is no such thing as CONSTITUTIONAL rights.  All Americans are born with God-given rights and the Constitution clearly enumerates (lists) the restrictions placed on Government.  Should they ever decide to flex their muscles and over-step their authority in an attempt to LIMIT your INALIENABLE, God-given rights to whom do you turn?

Inalienable means “unable to be separated from.”  Skin color is inalienable.  So are sex, height, and hand-size.  Inalienable means “born with.”   You cannot alter or change anything that is inalienable.  A man can cut off his penis but he is still a man.  His sex cannot be taken away or given away.  Same goes for skin color.  Even the late Michael Jackson was black…no matter how much his skin was bleached. INALIENABLE !

Creator-endowed rights are inalienable.  Congress can’t take them any more than they can grant them.  Supreme Court Justices cannot alter or abolish them, and “we the people” cannot vote them away.  God-given rights can only be surrendered.

READ: History lesson: The Great Depression, the foundation for the socialist takeover

But my experience teaches me that most of us are familiar with religion, speech, press, and assembly.  But it is those ten words tacked on after the final comma that we seem to have forgotten… “and to petition the Government for a redress of grievances.”

What good are our rights if we have no means by which we can appeal when they are violated?  What good is freedom of religion if we have no one to turn to when that right is illegally limited or restricted?  Without someone, or some thing to appeal our case to how can we ever have our grievances redressed?  Redressed means “to make right.”

Is it just me or do you feel there is very little opportunity for the average citizen to have his grievances made right?  To whom does the average American appeal (petition) when government gets out of line?  Do you trust one branch of government (the courts) to give you a fair shake when you have a complaint against another branch (executive) of the same government?

In sports we used to call that home town referees.  Today, in America, our petitions, if even heard, are ruled on by another branch of the same government who violated us in the first place.  That’s if you have the money to fight it.  Did you ever consider the fact that in order to fight the government for your First Amendment rights you have to hire a lawyer?  If petitioning the government for restoration of our rights requires going broke over attorneys’ fees do we really have the right to petition?  What other God-given rights do you have that you have to pay for?

So let’s review the Constitutional restrictions on the Government enumerated in the First Amendment.  Congress can make no laws regarding the free exercise of

Just as a curiosity, how many of those have been violated because of the China Virus?  To whom do we turn to get those rights restored?  How much will it cost?  How long will I have to wait?  What about a SPEEDY trial by a jury of my peers…not some terrorist in a black robe?  Isn’t the right to a speedy jury trial also an inalienable right?

But here is the rub.  The right to “petition the government for a redress of grievances” should be free.  Financial ruin should never be the consequences of exercising an inalienable right.  Do we expect to pay to exercise out religious rights, or free speech, or assembly?  Why should we have to pay a lawyer to exercise our right to petition for a redress of wrongs?  It is an inalienable right.
America is drifting into tyranny because there is no longer a right to petition for a redress of grievances.  Who do you turn to?  Where do you find an impartial judge?  What happens to crooked judges?  Do they ever pay a price for ripping off inalienable rights?  What penalty do the judges pay for judicial tyranny?  Have you ever tried to get an elected official to help fight for your rights?

There are so many things in America that infuriate me.  How about you?  To whom do you turn to secure your rights?  How much does it cost you?  Why should you have to pay to get the Government to obey the law?   When I show up outside a government building I am not a protester.  I am a petitioner exercising my inalienable right.  Why do they treat me as if I were a law breaker?

What good is a Constitution if the Government doesn’t obey it?  Where do they get the authority to violate the inalienable rights of an individual American?  Government is a verb and they have turned it into a noun.

I want the Government to obey the law.  I want them to leave me alone.  I have the inalienable right to be free.  The “Government” has stolen my rights and I want them back.

Rights aren’t free if you have to pay or get permission to exercise them.  To whom do I turn to SECURE my rights?