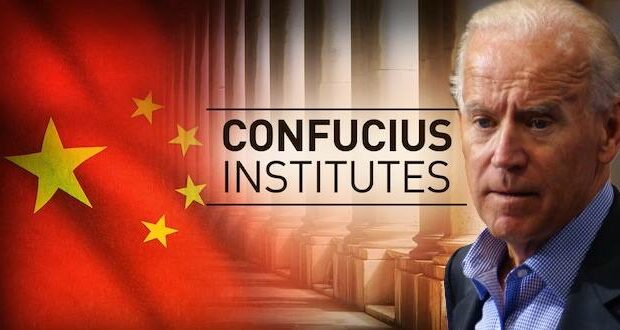 President Joe Biden has rescinded a Trump administration order that required universities in the U.S. to reveal their ties with a Communist organization. The move has human rights activists alarmed.

President Trump had previously signed an order directing the Department of Homeland Security to investigate Confucius Institutes. The organization is tied to the Chinese Communist Party (CCP) and has been banned from university campuses around the world and in the U.S.

Even before the Trump order in December, American Universities such as the University of Missouri, had already begun severing ties based on investigations into activities on campuses.  Confucius Institute members from China have also been tied to efforts to illegally obtain intellectual property around research and development in the nation’s most prestigious schools.

A U.S. subcommittee reported (pdf) that from 2006 to 2018, China had pumped over $158 million in funding to U.S. schools for Confucius Institutes. But “nearly 70 percent of U.S. Schools that received more than $250,000 from Hanban failed to properly report that amount to the Department of Education.”

The stated purpose of Confucius Institutes is to teach Chinese language and culture. In addition to espionage, the orgnaization has been accused of censoring both American and Chinese students, funneling money to  U.S. professors now charged with espionage and using their influence through university sources, to affect U.S. policy towards China according to Ink Stone News.

Congressional members on both sides of the aisle have questioned the influence of the institutes.

“These Confucius Institutes are, in short, a tool for China to spread influence and exercise soft power in its rivalry with the United States,” Hawley said. “Most troubling of all, Confucius Institutes pose a danger to our national defense and security,” U.S. Senator Josh Hawley told the  Columbia Daily Tribune last year. “Our nation’s top law enforcement and national security officials have been vocal about the threat of Confucius Institutes and other Chinese initiatives as a conduit for espionage and research theft.”

Pompeo noted that the Confucius Institute is “an entity advancing Beijing’s global propaganda and malign influence campaign on U.S. campuses and K-12 classrooms.” The institutes are “funded by the PRC and part of the Chinese Communist Party’s global influence and propaganda apparatus,” he added.

In a 2019 report, Human Rights Watch warned that “Confucius Institutes are extensions of the Chinese government that censor certain topics and perspectives in course materials on political grounds, and use hiring practices that take political loyalty into consideration.”

“By quietly backing away from the proposed rule without consulting Congress, the Biden administration is sending a concerning signal about its scrutiny of CCP influence in academia, and telling academic institutions that they don’t need to be transparent about their ties to China’s regime,” the statement reads. ‘It’s all the more disturbing because the education industry already fails to report billions of dollars of foreign gifts and contracts. I strongly urge the Biden Administration to stick to its promises to prioritize the CCP as our main national security challenge, including in the American education system.”

The respected magazine Foreign Policy reported that in recent years, “the enthusiasm with which university leaders around the world have embraced the institutes has soured. Increasing numbers of them have been shut. That’s partially thanks to the geopolitical shift against an increasingly autocratic Chinese Communist Party (CCP) under Xi Jinping’s leadership and partially due to the institutes themselves being no more immune to the CCP’s waves of political repression than any other Chinese state institute—even abroad.”
–Dwight Widaman | Metro Voice
biden campuses CCP chinese language colleges confucius institute culture department of homeland security espionage executive order influence joe biden josh hawley mike pompeo president propaganda trump university of Missouri 2021-02-19
Dwight Widaman