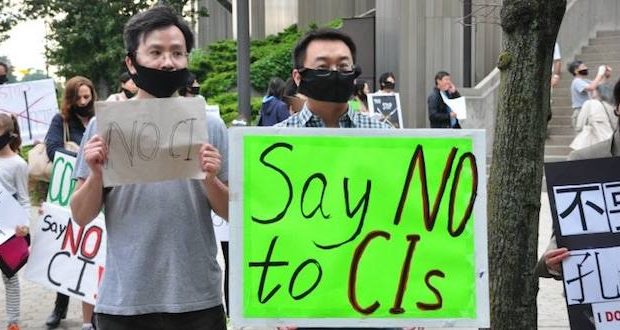 Around the world, students are protesting the Communist agenda of the Confucius Institute. Photo: Video screen shot.

The University of Missouri is cutting ties with the controversial Confucius Institute. Republican Sen. Josh Hawley has been critical of the relationship, the Columbia Daily Tribune reported.

“These Confucius Institutes are, in short, a tool for China to spread influence and exercise soft power in its rivalry with the United States,” Hawley said. “Most troubling of all, Confucius Institutes pose a danger to our national defense and security. Our nation’s top law enforcement and national security officials have been vocal about the threat of Confucius Institutes and other Chinese initiatives as a conduit for espionage and research theft.”

The contract will end in August, six months before it was otherwise scheduled to end, according to a news release issued Wednesday by MU.

“We were notified by the U.S. Department of State’s Bureau of Educational and Cultural Affairs this past July that due to changes in State Department guidance, we would now be required to have a certified Mandarin Chinese language teacher in every classroom with a Confucius Institute staff member,” Mary Stegmaier, interim vice provost for international programs, said in the release.

On July 15, the State Department notified MU that it had found several issues during a visit to Columbia to review the activities of people brought to the United States by the Confucius Institute. During the visit, regulators “discovered a number of potential regulatory violations that the University of Missouri-Columbia should correct,” said a letter from Henry Scott, director of the Office of Private Sector Exchange Program Administration.

The respected magazine Foreign Policy reported last year that “In recent years, however, the enthusiasm with which university leaders around the world have embraced the institutes has soured. Increasing numbers of them have been shut. That’s partially thanks to the geopolitical shift against an increasingly autocratic Chinese Communist Party (CCP) under Xi Jinping’s leadership and partially due to the institutes themselves being no more immune to the CCP’s waves of political repression than any other Chinese state institute—even abroad.”

The Chinese government supplies Confucius Institutes with material that portrays China in a positive light and downplays issues associated with Taiwan, Tibet and the Tiananmen Square protests, Hawley said. The university defended the relationship, stating that it has not been limited or seen evidence of intellectual property theft.

Previous: Satanist argues in court that Missouri abortion rules violate her rights
Next: How school choice has helped our families: A letter from two charter school parents