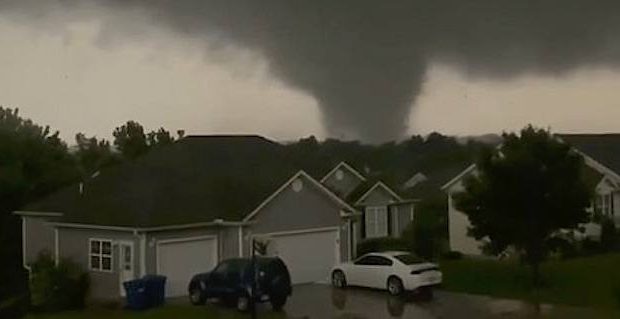 A major and catastrophic tornado has hit Missouri’s capital, Jefferson City. Gov. Mike Parson has issued a state-wide emergency saying that at least 13 tornadoes have touched down causing widespread destruction and death.

Rescue efforts continue on this Thursday morning as firefighters search an apartment building near Highway 54.

“Right now we have no confirmations of any fatalities related to this storm, however, we have identified several people that are injured as a result of this,” Williams says.

The ‘violent tornado’ was confirmed in Jefferson City around 11.43pm Wednesday night. Jefferson City took a direct hit by the storm and there are several unconfirmed reports of residents hearing ‘mass casualties’ over their scanners.

Three deaths in Missouri have been confirmed, the result of a tornado earlier in the day, but there is no word yet on possible fatalities in the capital or other cities. News reports say dozens of people may be dead with hundreds still trapped in their homes, businesses, shopping centers and churches.

Police Lt. David Williams said officers have received multiple calls of people being trapped in their homes and 20 people have been rescued by emergency workers in Jefferson City.

An emergency alert described the tornado as ‘large and destructive’ and moving at 40mph. The NWS of Saint Louis said on Facebook that the tornado has ‘produced extensive damage’.

Some residents are also trapped under rubble in the Hawthorne Apartment complex that suffered damage to more than half of its building.

Austin Thomson, 25, was in the laundry room of his apartment complex to do his wash and noticed that the wind started picking up. He saw sheets of rain coming down and a flagpole bend and then slam to the ground. The windows broke and he dove behind the washer and dryers.

After it calmed down, he walked outside to check the damage. 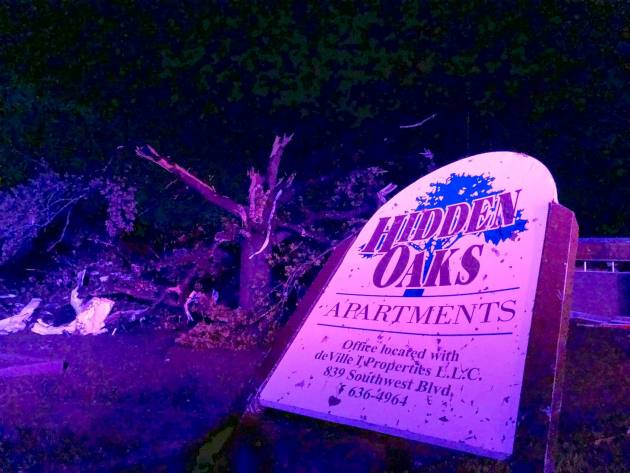 Firefighters have begun rescue operations in the area, including at the apartment building. Missouri Task Force 1 was also activated.

Williams is urging those who are not impacted by the tornado to stay out of the damaged areas.

“The primary place right now we’re concentrating our efforts on is the Ellis Boulevard area near Highway 54, as well as Stadium and on Dunklin,” says Williams.

The Boone County Fire District says 80 members of Missouri Task Force One are in or heading to Jefferson City. They include rescue squads, a trauma surgeon, two medical specialists and two hazmat technicians.

‘We’re doing okay but praying for those that were caught in damage, some still trapped,’ Missouri Gov. Mike Parson said on Twitter early Thursday.

A National Weather Service meteorologist said: ‘As of this morning, the main parts of the storms have pushed eastward, thank goodness,’ leaving the region to deal with just another expected two inches of rain through Friday.

However, Missouri Public Safety tweeted that there was a possibility of more tornadoes and flash flooding.

First reponders warned that ‘flash flooding hazards will expand as rain continues’. There have also been numerous reports of gas odors.

Eight years ago this month, Joplin, Missouri was hit with another catastrophic storm for which the city of 50,000 is still recoeirng.

Previous: Weight loss: How to shed pounds fast this summer
Next: Discovered this year, 1200 Holocaust victims laid to rest