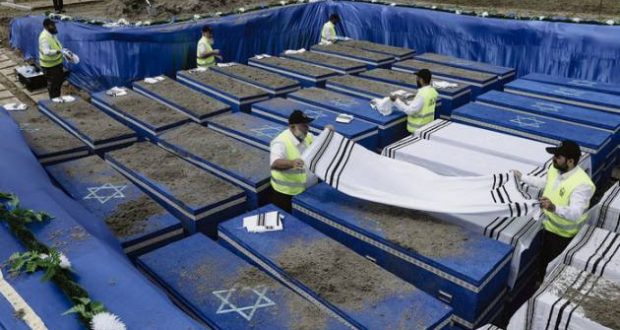 More than 1,200 Holocaust victims were laid to rest on Wednesday, May 22, in Belarus after their remains were discovered earlier this year in a Nazi-era mass grave under a construction site.

Construction workers stumbled upon the remains of at least 1,214 people in January as they started work on luxury apartments in the southwestern city of Brest, which was home to a significant Jewish community before the Second World War.

The remains of more than 1,200 Holocaust victims were “brought from the killing field that was found at the beginning of the year at a construction site where a Jewish ghetto once lay,” said the search and rescue volunteer organization, ZAKA, who assisted Belarus’ military, reported Haaretz.

Rather than canceling the building permit where the remains were initially found, officials proposed to simply bury the discovered remains, much to the dismay of many Jewish leaders.

In a solemn ceremony outside the city, the Holocaust victims were buried side-by-side in 120 blue coffins covered with the Star of David, according to the Associated Press.

Over 300, including city officials, Jewish community leaders and diplomats attended the burial and ceremony, as the victims were laid to rest overseen by a local Jewish rabbi.

Attendees, some of whom closed their eyes in prayer, took turns to toss earth onto the caskets before the pit was filled in.

“The soul goes up to heaven through this process, so it was very important for the Jewish community that it was all done with Jewish custom,” said Israel’s ambassador in Belarus, Alon Shoham.

Following the funeral, Regina Simonenko, a member of the Jewish community, told Reuters she had mixed feelings and had been shaken by remembering the events, but she said it was important the Holocaust victims had been laid to rest.

“If we don’t remember, then things like this can happen again,” she said.

Around 28,000 were detained in the ghetto until it was destroyed in October 1942, when 17,000 residents were brought out of town and executed. The fate of the other victims remains unknown.

Many are unhappy about the officials’ decision to continue to build on the site where more remains could potentially lie.

“I am upset that the officials want to build on the sacred site,” he added.

Simonenko hit out at the officials for pushing forward with the construction of the luxury properties, instead of taking the time to run DNA tests and establish identities.

“We were told that DNA tests are expensive and take a long time,” she told The Associated Press.

The construction project is “an affront to the memories of the Jewish residents of the city who were shot and murdered in cold blood at that very site,” said The World Jewish Congress.

Since the public outcry, officials have promised to erect a monument in the area and have said the foundation of the apartment block does not overlap with the burial site.

Brest Mayor Alexander Rogachuk said, “There will be nothing but the lawn on the burial site. We’re not even going to put up parking spaces or playgrounds there.”