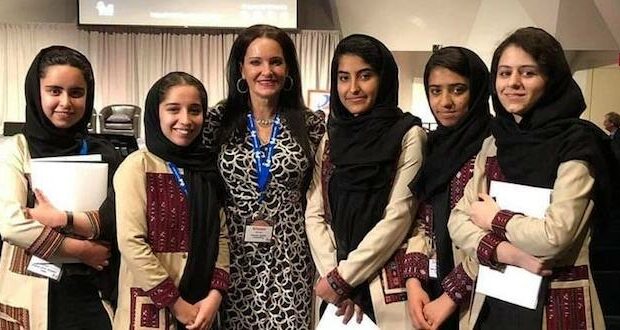 Allison Reneau with five members of the team in 2019. The girls are now safe.

Ten Afghan girls who faced a bleak future and even death under the new Taliban rulers have been rescued thanks to one Christian mom on a mission.

Allison Reneau personally flew to the Middle East to organize and ensure the rescue of the 10 members of Afghanistan’s all-girls robotics team. Her flight to Qatar was instrumental in securing the girls’ safety.

Reneau says she’s not done yet as Joe Biden refused on Sunday to commit to saving those who have worked with the U.S. over the last two decades.

The utter chaos has resulted in dozens of Afghans, including women and babies, being shot or trampled to death in recent days.

Reneau, a mother of 11 herself, wants to save as many girls from the Taliban that she can before the reinstatement of Islamic Sharia law bans education for females and forces them to live indoors unless they are with a male relative.

NBC News reports the details of Reneau, a 60-year-old Harvard graduate, and her around-the-world mission.

She had been in touch with the team of girls ages 16 to 18 since meeting them as a board member for Explore Mars at the organization’s annual Humans to Mars conference in 2019.  The team had been recognized as the future of Afghanistan and was an example of how far women’s rights had come since the U.S. liberation following the 9/11 terror attacks on New York City and Washington, D.C.

Part of her drive comes from her faith. Reneau is the Executive Director of Victory Athletics and Victory Academy, a private, Christian school. She and her husband Dale are active in their church and the Christian community. Her commitment to helping others has now gone international.

Reneau told NBC News she “couldn’t shake” the feeling that the girls were in danger while watching the news of the advancing insurgent army in early August. She called Sen. Jim Inhofe (R-OK), a ranking member of the Armed Services Committee, but that “lead went cold” when the senator became “overwhelmed with the need to help our American citizens.”

Deciding to try by herself, she got on an airplane headed to the Middle East where she landed in Qatar, which is still thousands of miles away from Afghanistan. But she had a friend that could help.

“I remembered my former roommate in D.C. a couple of years ago was transferred to Qatar,” she explained. “She worked in the U.S. Embassy in Qatar… she was sure her boss would approve helping the girls.”

“She wrote up a request, and I got all of their passports together,” Reneau said. “She went back to the Embassy at midnight and worked all night to prepare the documents and packets for the girls.”

“It’s a very narrow window of opportunity,” she told NBC News. “I knew that if I didn’t run through that door now — it’s now or never. Sometimes you only get one chance.”

Thankfully, all 10 girls were able to make it to the American-held side of Kabul’s airport and boarded a plane. Reneau

“Several members of the girls’ Afghan robotics team have safely arrived in Doha, Qatar, from Kabul, Afghanistan,” a statement from the Digital Citizen Fund (DCF) and Qatar Ministry of Foreign Affairs said on Thursday.

The girls were taken to a secure location and will continue to pursue higher education.

Elizabeth Schaeffer Brown, a board member on the DCF told NBC News, “Ultimately the girls ‘rescued’ themselves. If it were not for their hard work and courage to pursue an education, which brought them in contact with the world, they would still be trapped. We need to continue to support them and others like them.”