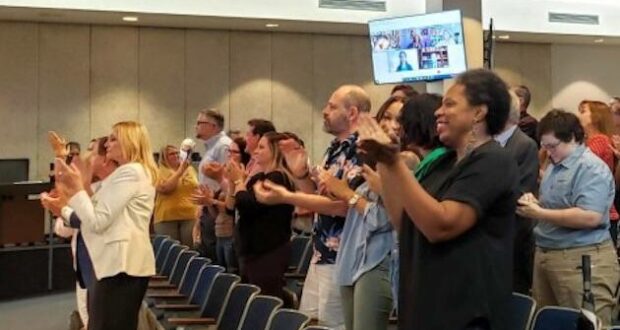 A circuit judge has ruled that St. Louis County cannot enforce a mask mandate for now. Judge Ellen “Nellie” Ribaudo issued a preliminary injunction ordering the county to stop taking action to enforce the mask mandate while the court considers the full case.

“This court’s decision is purely one of the relevant laws,” she said in her order. “The court notes that the COVID-19 pandemic has been a political issue since it first emerged in this country and has continued to be a political flash point for many.”

St. Louis County Executive Sam Page issued a mask mandate on July 26. The county-wide mandate required masks in indoor public areas, as well as on public transportation, for all those aged 5 and older. In response, Attorney General Eric Schmitt filed a lawsuit against the mandate on the same day.

On July 27, the County Council cast a supermajority vote of 5-2 to rescind the mandate. However, Page at the time maintained that the mask mandate was still in effect. Ribaudo then issued a temporary restraining order on August 3 against St. Louis County for having continued to enforce the mask mandate despite the county council vote against it. The order prevented the mandate from being enforced and was in effect until August 19.

“The court implored for the parties to work together for the benefit of the public to find common ground as this virus continues to be a very real and significant danger to the state of Missouri, St. Louis County and the world,” Ribaudo wrote. “Both sides agree that the increase in COVID 19 cases is significant and of great concern, they agree that people should take appropriate precautions to stop the spread of the virus. Despite agreeing on these issues they are unable to resolve their dispute.”

“The people prevailed yet again against County Executive Page and his health department for attempting to impose their will illegally on the people of St. Louis County,” he said in a statement. “I will not stop in my fight against government overreach.”