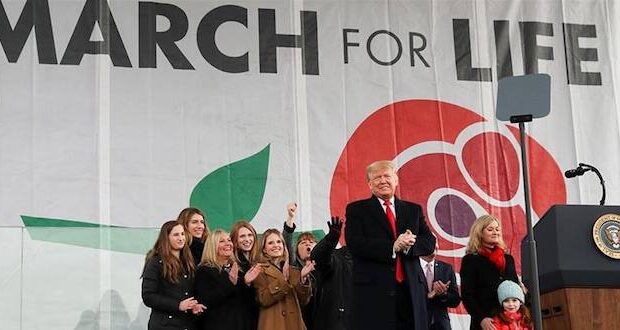 Kansans for Life (KFL) has given President Donald Trump the most enthusiastic endorsement one can get.  But the organization says those who have pro-life views need to up their game this year and do more than just vote for the president.

The reason is that the President has done more to protect babies from abortion than any president in the history of the nation.

“Without question Donald Trump is the most pro-life president in the history of the United States,” stated Melissa Leach on behalf of the Kansans for Life Political Action Committee.

“Not only has he made quality appointments to the federal bench and other federal positions, but he has reduced the flow of public dollars to the abortion industry, lent his voice to the Pain Capable Unborn Child Protection Act and became the first president to attend the National March for Life.”

Leach said Biden is not an option for any pro-life voter, noting that “Biden has taken such a radical position on this topic that he now strongly supports taxpayer-funded abortions.”

She says that pro-life voters need to do more than just vote for President Trump. They need to actively support his campaign and urge pro-life friends and family to support him as well, she added.

Pro-lifers should do more than vote to ensure the President is able to continue his historic work on behalf of women and their preborn children.

“Pro-lifers should do more than vote to ensure the President is able to continue his historic work on behalf of women and their preborn children. There is so much at stake in November, and we cannot leave anything on the field.”

In one of his first acts as president, Trump reinstated and expanded the Mexico City Policy, which prohibits taxpayer funding to groups that promote or provide abortions overseas. The change defunded Planned Parenthood’s international arm of about $100 million in U.S. tax dollars.

Trump has repeatedly called out the Democratic Party’s extreme position on abortion. During his State of the Union address Trump slammed the governors of New York and Virginia for promoting abortion up to birth and infanticide. He also called for Congress to pass a ban on late-term abortions on babies who are capable of feeling pain.

Trump and his administration have made a number of changes to protect those who morally object to abortions, expanding conscience protections for medical workers who believe it is wrong to kill an unborn baby and increasing religious exemptions for Obamacare.

His administration also intervened to stop the United Nations from supporting abortion in a resolution about sexual violence. In 2018, under his leadership, the State Department removed references to the so-called “right” to abort an unborn baby from a global human rights report as well.

During his presidency, the administration also finalized a new Title X rule that requires health care entities to completely separate abortion from their taxpayer-funded services. Planned Parenthood, which already has said it will not comply, could lose about $60 million annually through the policy change. However, the abortion group is suing to block the cuts.

Trump has appointed over 200 conservative judges to federal courts as well, including two to the U.S. Supreme Court and he has repeatedly told the UN that he will not promote abortion as a human right.

Previous: Media shamed: ‘Not one question about children who were killed’ says White House press secretary
Next: Kanakuk Kamp shuts down after dozens test positive for COVID-19