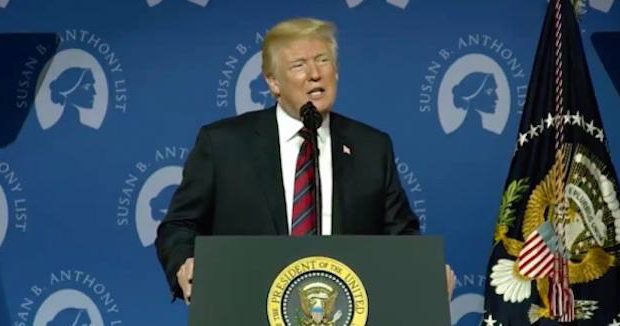 At pro-life gala Trump says ‘every life has meaning’

Pro-life leaders have called President Trump the most pro-life president in history. But it has been a moniker he has earned through his policies, not just his talk. He was roundly applauded at a pro-life gala this week for his efforts.

Trump assured the prominent gathering of pro-life leaders and activists that the pro-life movement will “never fail” as long as “we keep trusting God” and quoted the Old Testament to argue that “every child is a precious gift from God.”

Trump addressed hundreds gathered for the 11th annual Campaign for Life Gala, hosted by the nation’s most prominent pro-life lobbying organization, Susan B. Anthony List, at the National Building Museum in Washington, D.C.

“As the Lord says in Jeremiah, ‘Before I formed you in the womb, I knew you. Before you were born, I set you apart,'” Trump said, quoting Jeremiah 1:5.

Trump, whom many conservatives believe to be one of the greatest pro-life presidents in history even though he has only been in office for just 15 months, praised his administration’s pro-life accomplishments and declared to the crowd that he has kept his campaign promises to pro-lifers.

Trump’s speech came on the same day that the Department of Health and Human Services officially proposed a rule change to the Title X Family Planning Grant Program so that abortion providers wouldn’t receive federal tax dollars through the program.

“Today, we are making another historic announcement. For decades, American taxpayers have been wrongfully forced to subsidize the abortion industry through Title X federal funding,” Trump said. “So today, we have kept another promise. My administration has proposed a new rule to prohibit Title X funding from going to any clinic that performs abortions.”

Trump followed in the footsteps of Vice President Mike Pence, who spoke at the gala last year.

“When a mother and a father hold a new baby in their arms, they are changed forever,” the president said. “When a child says, ‘Mommy or Daddy,’ for the first time, there is nothing like it anywhere in the world. No matter what you do, there is nothing like it. When parents watch their children thrive and grow, they are filled with joy beyond words and a love beyond measure. When we look into the eyes of a newborn child, there is no doubt we see the beauty of human soul and the mystery of God’s great creation.”

Although Trump and his administration have enacted several pro-life policies since taking office last January, Trump warned the pro-life crowd that Democrats could reverse political gains of the past year if they get “complacent” and don’t vote in the 2018 midterm elections.

“If Democrats gain power, they will try to reverse these incredible gains,” Trump said, also speaking of some of his other accomplishments in other areas of public policy.

“On [the abortion] issue, like so many other issues, the Democratic Party is far outside the American mainstream, far outside,” he added.

Among Trump’s campaign promises was his vow to support legislation that would ban elective abortions after 20 weeks of pregnancy. Such legislation was blocked by the Senate earlier this year.

“The United States is one of only seven countries in the world to allow elective abortions after 20 weeks — when unborn babies can truly feel the pain. Yet, Democratic senators … all [except three] voted against the 20-week bill and in favor of late-term abortion,” Trump said. “You got to get out and vote. We are nine votes away from passing the 20-week abortion bill in the Senate. The Democratic senators are up for re-election in 10 states that I won by a lot.”

Trump concluded by stating that when people “stand for life,” they “stand for the true source of America’s greatness.”

“As long we have faith in our citizens, confidence in our values and trust in our God, then we will never, ever fail,” he asserted. “Our nation will thrive, our people will prosper and America will be greater than ever before. That is what’s happening.”

SBA List President Marjorie Dannenfelser called the president’s words “encouraging and warmly received.” She stated that Trump’s remarks at the annual gala represent “a watershed moment” in the history of the pro-life movement.

“President Trump has embraced the pro-life movement as his own. True to his word, he is governing as the most pro-life president our nation has ever seen,” Dannenfelser said. “He has been a fighter and a champion for unborn children, their mothers, and pro-life taxpayers, and his administration has made unprecedented gains for life. With President Trump leading the charge and the pro-life grassroots energized by his agenda, we are closer than ever to ending the injustice of abortion and restoring a society that protects every mother and child.”

Later on in the evening, Counselor to the President, KellyAnne Conway, a longtime conservative pro-life pollster, received the SBA List’s 2018 Distinguished Leader Award. Another speaker at the event was Majority Whip Steve Scalise of Louisiana, who was shot last year by a far-left gunman during a Congressional baseball practice in Virginia. Scalise led the “Toast for Life.”

Previous: Twenty Nazarene pastors and wives killed in plane crash
Next: Was the Right Singer Named the Winner of ‘The Voice?’