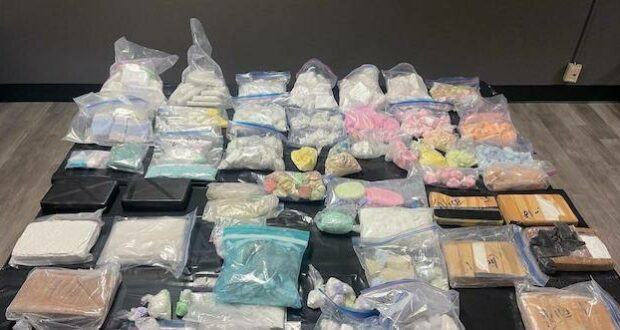 “ACSO detectives and their partners at the Narcotics Task Force recovered 92.5 pounds of illicit fentanyl at locations in Oakland and Hayward. That’s 42,000 grams that were headed for the streets of the Bay Area. This is a glimpse of the fentanyl epidemic,” the office said in an April 23 tweet. Fentanyl is 50 to 100 times stronger than morphine.

Drug trafficking rings usually distribute fentanyl by kilograms, the office stated. With one kilo having the potential to kill 500,000 people, 92.5 pounds is enough to kill 20 million. At a street value of $100 per gram, the seized fentanyl’s total estimated value comes to around $4.2 million.

The seizure comes after the Drug Enforcement Administration (DEA) warned in early April of a surge in mass overdose events involving fentanyl. The DEA categorizes overdoses as mass events only when there are three or more such cases occurring during a short period of time within the same location.

The drugs have been traveling freely by shipments from China and across the border from Mexico, as drug cartels take advantage the illegal immigration crisis.

In a letter to law enforcement agencies, DEA administrator Anne Milgram pointed out that there have been seven such mass overdose incidents since January in which 58 people died, with 29 involving fentanyl.

“Fentanyl is highly addictive, found in all 50 states, and drug traffickers are increasingly mixing it with other types of drugs—in powder and pill form—in an effort to drive up addiction and attract repeat buyers,” Milgram said in the April 6 letter.

To counter the spread of the opioid, bars across the country have begun handing out free fentanyl test strips. These strips are “cheap” and “super easy to use,” Dr. Kathleen Clanon, medical director of Alameda County Health Care Services, said to Reuters. The organization is involved in the distribution of these fentanyl test strips.

“They are very sensitive, meaning that the comparison tests have shown that they are likely to show fentanyl if it’s there and I’m comfortable with that as a community test.”

Authorities believe that with the Biden administration ending Title 42, a Trump health directive that prevented even more illegal immigration across the border, a historic amount of drugs could enter the country in 2022.

Previous: Elohim reigns in the face of evil and injustice
Next: China forcing churches to spout communist propaganda