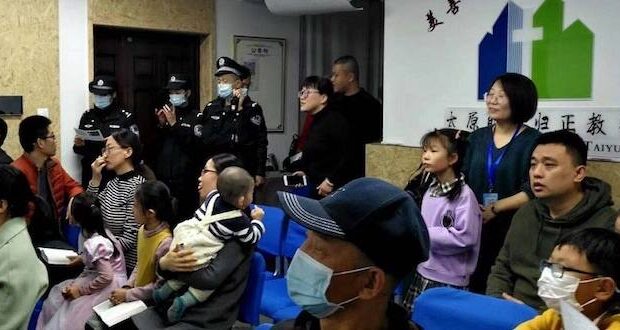 A house church is raided in China.

Churches and other religious bodies in China are being forced to spout communist propaganda as the country has become “increasingly hostile to faith, said a bipartisan U.S. federal government commission.

According to the report, adherents of groups such as underground Catholics, house church Protestants, Uyghurs and other Muslims, Tibetan Buddhists, and Falun Gong practitioners, “are especially vulnerable to persecution.” Researchers said the regime continued to harass and jail Catholic priests who refuse to join the state-controlled Catholic association.

“Throughout 2021, the State Administration for Religious Affairs … and other agencies issued new legal measures, imposing further restrictions on clergy, religious schools, and religious content on the internet.” 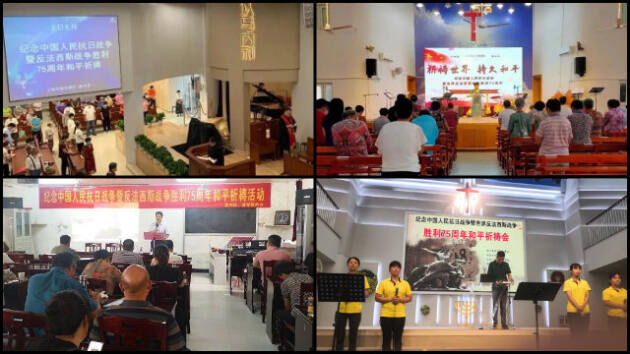 On orders from the government, Christian churches across China held activities to commemorate China’s victory over Japan 75 years ago.

Over the past years, the communist regime has increased control over domestic religious affairs. It announced in March 2018 to place the religious affairs bureau directly under CCP’s United Front Work Department—the agency responsible for running political influence operations both at home and overseas, with a focus on managing potential opposition groups.

Chinese leader Xi Jinping in December called state-controlled religious groups in China the ties between the Party and the believers, who should be “united around the party.”

On March 25, 2021, the state-run Chinese Catholic Patriotic Association, which is not recognized by the Vatican, held a lecture on the history of the CCP. Last April, Buddhist and Taoist temples in many provinces sent their monks to visit the tombstones and gravesites of communist martyrs and pledge allegiance to the party.

Other churches operating in the open, including protestant congregations, have been forced to promote communist policies to their wary congregations. Even the Bible has been re-translated to reflect communist ideology with some of scripture’s most iconic stories being rewritten to be almost unrecognizable.

All faiths have come under even tighter control.

“Local authorities organized seminars to indoctrinate monks and nuns at Tibetan Buddhist monasteries, [and] restricted Tibetans’ access to temples with a heavy security presence,” the report read. They “destroyed sites and symbols of religious significance, and detained and punished Tibetans for listening to the Dalai Lama’s teachings or possessing his portrait.”

While the regime further tightened its monitoring of domestic religious affairs, those beyond its control became targets for persecution, including independent spiritual communities and whoever run afoul of the party.

The report also detailed abuses in the far west Xinjiang region, such as physical and psychological torture, rape and other forms of sexual violence, forced labor, forced sterilization, and abortion while in custody, citing former detainees and witnesses. Moreover, authorities separated as many as 880,000 Muslim children from their parents.

Besides Beijing, Moscow also continued to employ “an array of problematic legislation” to persecute religious minorities, said the report, including Muslims, Protestants, members of the Orthodox Church of Ukraine, Falun Gong practitioners, and adherents of indigenous religions.

The report also noted USCIRF recommendations to be implemented by the U.S. government—including the designation of Russia as a country of particular concern.

“Moving forward, the United States should take additional steps to support freedom of religion or belief around the world,” USCIRF Vice Chair Nury Turkel stated in a press release.