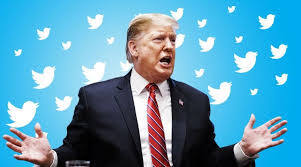 After years of Congressional testimony and user complaints of bias and censorship by Twitter and other social media platforms, President Donald Trump is set to sign an executive order on Thursday aimed at those companies.

Spokeswoman Kayleigh McEnany said on Air Force One, traveling with Trump to Washington from Florida, that Trump will sign the executive order “pertaining to social media.” She did not provide more details.

The White House pool, of which Metro Voice has press credentials, later confirmed the executive order will be signed on Thursday.

The president posted to Twitter late Wednesday denouncing alleged censorship efforts of “Big Tech” ahead of the Nov. 3 presidential election.

“Big Tech is doing everything in their very considerable power to CENSOR in advance of the 2020 Election. If that happens, we no longer have our freedom,” Trump wrote.

“I will never let it happen! They tried hard in 2016, and lost,” he added. “Now they are going absolutely CRAZY. Stay Tuned!!!”

The announcement of the potential executive order comes a day after Twitter applied a warning label on the president’s Twitter post where he had expressed concerns over mail-in voting.

To add fuel to the fire concerning Twitter’s bias, Federal Election Commission data shows over 99% of donations from Twitter employees went to Democrats. In addition, tweets from Twitter’s top executive in charge of fact-checking shows him to be a radical leftist with extreme views who has tweeted false information which was not fact-checked.

Twitter’s “Head of Site Integrity” Yoel Roth brags on his LinkedIn account that he is in charge of “developing and enforcing Twitter’s rules,” like the one that led Twitter to slap a new “misleading” warning label on two of President Trump’s tweets concerning nationwide mail-in balloting on Tuesday.

Roth’s own barrage of anti-Trump, politically charged tweets seemingly calls into question whether he should be creating guidelines for the president and other Twitter users, especially when Twitter is under fire for its alleged left-wing bias.

Commentators, meanwhile, have argued that Trump’s tweets on the risks of mail-in voting were not actually misleading, and the president accused Twitter of seeking to “interfere” in the upcoming election under the guise of a supposedly neutral “fact-checking” policy. Experts have said that a “genuine absentee ballot fraud scandal” is currently underway in a New Jersey city council election, for example.

I’m just saying, we fly over those states that voted for a racist tangerine for a reason.

Roth has previously referred to Trump and his team as “ACTUAL NAZIS,” mocking Trump supporters by saying that “we fly over those states that voted for a racist tangerine for a reason,” and called Senate Majority Leader Mitch McConnell, R-Ky., a “personality-free bag of farts.” Last August, Twitter suspended McConnell’s Twitter account, prompting the GOP to threaten to cut off advertising on the site until Twitter relented.

Yes, that person in the pink hat is clearly a bigger threat to your brand of feminism than ACTUAL NAZIS IN THE WHITE HOUSE.

Two Republican lawmakers, Sen. Josh Hawley (R-Mo.) and Rep. Matt Gaetz (R-Fla.), announced on Wednesday that they are working on legislation that would remove federal protections for companies like Twitter that release the company from being held liable for what is posted on its platform.

Publishers can be held liable for any content they post, while social media platforms are protected by Section 230 of the Communications Decency Act, which states that “no provider or user of an interactive computer service shall be treated as the publisher or speaker of any information provided by another information content provider.”

“I will introduce legislation to end these special government giveaways,” Hawley wrote on Twitter. “If [Twitter] wants to editorialize & comment on users’ posts, it should be divested of its special status under federal law (Section 230) & forced to play by same rules as all other publishers. Fair is fair.”

Hawley also shared a letter he sent to Twitter CEO Jack Dorsey demanding a response by June 15 to provide “the sources on which Twitter relied to decide to editorialize regarding the President’s political speech.” The senator also asked Dorsey to “explain why you think that companies that act like publishers should not be treated like publishers.”

“It makes little sense to treat companies that publish their editorial comments about others’ content as if they are mere distributors. Companies that act like publishers should be treated like publishers. Section 230 should not treat Twitter and neutral internet service providers in the same way when they function so differently,” Hawley wrote.

Gaetz announced on Wednesday that he was “working on legislation to revise Section 230 so we don’t have election interference from companies like Twitter.”