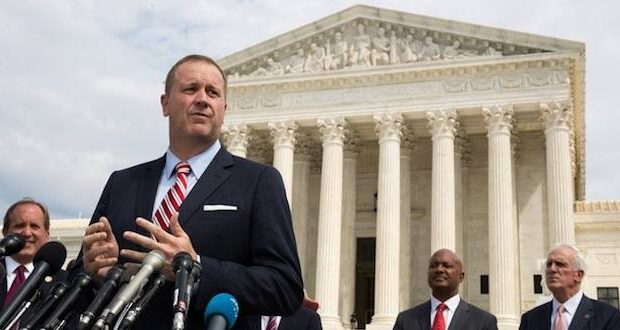 Missouri Attorney General Eric Schmitt on Tuesday sued the Chinese government over the way it has handled the coronavirus pandemic. It is the first state to file such a suit, according to a Reuters story.

The civil lawsuit, filed in U.S. District Court for the Eastern District of Missouri, alleges negligence, among other claims. It says Missouri and its residents suffered possibly tens of billions of dollars in economic damages and seeks cash compensation.

“The Chinese government lied to the world about the danger and contagious nature of COVID-19, silenced whistleblowers and did little to stop the spread of the disease,” Schmitt, a Republican, said in a statement. “They must be held accountable for their actions.”

The lawsuit also accuses the Chinese government of making the pandemic worse by “hoarding” masks and other personal protective equipment. China is already facing similar lawsuits filed in U.S. courts on behalf of U.S. business owners.

“When Chinese authorities were well aware of human-to-human transmission, they didn’t do anything about it,” Schmitt said in a Missouirnet story. “In fact, they destroyed critical evidence, concealed those indications, silenced whistleblowers along the way, including health professionals in China, all of that losing valuable and critical time when this deadly virus could have been stopped in its tracks.”

Schmitt said China’s failures have led to Missouri’s loss of life and severe economic consequences. “And as legislators go back next week to craft a budget, they’re dealing with this in very real terms,” he said. “They’re going to have a real impact for real people.”

According to the lawsuit, by late December, the Chinese health officials had serious evidence of human-to-human transmission.

Despite this evidence, the Chinese health officials did not report the outbreak to the World Health Organization (WHO) until December 31. When the Chinese authorities did inform the WHO of the outbreak, they denied the potential for human-to-human transmission, it said.

Missouri Democrats, have joined national Democrats who tend to defend Communist China and its handling of the pandemic. They say the suit is a political stunt. State Rep. Kip Kendrick, D-Columbia, is the ranking Democrat on the Missouri House Budget Committee. He told the Kansas City Star that the state does not have a leg to stand on in the lawsuit and that Schmitt is wasting taxpayer money. That may be news to other states who are considering similar lawsuits.

International law experts, who tend to side with China, told Reuters that efforts in U.S. courts to hold China liable for the virus would probably fail. A legal doctrine called sovereign immunity offers foreign governments broad protection from being sued in U.S. courts, said Tom Ginsburg, a professor of international law at the University of Chicago.

“If the United States wants to bring claims against China, it will have to do so in an international forum,” said Chimène Keitner, an international law professor at the University of California, Hastings College of the Law in San Francisco. “There is no civil jurisdiction over such claims in U.S. courts.”

In Beijing, foreign ministry spokesman Geng Shuang also said China’s response was not under the jurisdiction of U.S. courts, adding that it had provided updates on the outbreak to the United States since Jan. 3.

Senator Ben Sasse, a member of the Senate Select Committee on Intelligence welcomed the lawsuit.

“The Chinese Communist Party did what authoritarians always do: they hid the truth to save their hides. Chairman Xi’s lies have killed hundreds of thousands of innocent people and wreaked untold economic damage,” he said.

Last week, Congressmen Chris Smith and Ron Wright had introduced a legislation that would strip China and other countries of their sovereign immunity if they intentionally made misrepresentations regarding the coronavirus, thereby allowing US citizens, businesses and the local government to sue those governments for the deaths, pain and suffering, and economic losses caused by the COVID-19 pandemic.