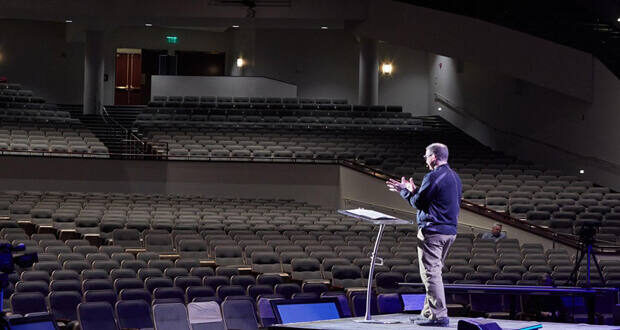 Americans experienced seismic changes over the past two years, including, for many, how they attend church. The shift in behavior coincides with a shift in theology.

The biennial State of Theology study conducted by Lifeway Research found relative stability in some of the religious and cultural beliefs U.S. adults hold. After months of quarantines and social distancing, however, Americans increasingly believe worshiping apart from a church is as good as attending church services.

In March 2020, as the COVID-19 pandemic was just beginning in the United States, 58 percent of Americans said worshipping alone or with one’s family was a valid replacement for regularly attending church, with 26 percent strongly agreeing. In 2022, 66 percent believe worshiping apart from a local congregation is as valid as worshiping with one, with 35 percent strongly agreeing. 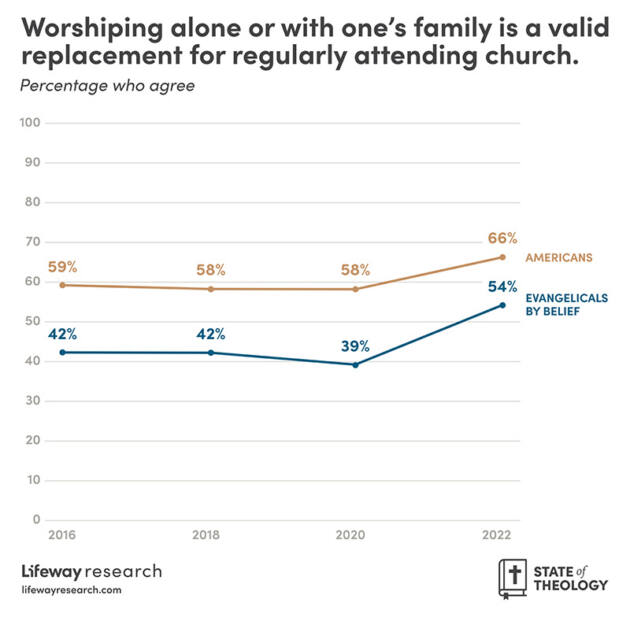 Additionally, most Americans (56 percent) don’t believe every Christian has an obligation to join a local church. Fewer than 2 in 5 (36 percent) say this is something all Christians should do.

Tracking surveys from Lifeway Research throughout the pandemic found U.S. Protestant churches were open at pre-pandemic levels by summer of 2021 and into 2022, but early this year few churches had reached pre-pandemic attendance levels.

“Religious identity, beliefs and behavior are interrelated,” said Scott McConnell, executive director of Lifeway Research. “When in-person church attendance behaviors were interrupted and habits were broken, it affected some Americans’ beliefs about the need to gather with other believers to worship.”

With many theological beliefs remaining stable, those that did shift point to areas where a changing U.S. culture may be impacting Americans’ religious perspectives.

Most Americans believe in God, but they’re a little confused about who the divine is.

While 66 percent of U.S. adults say God is a perfect being and cannot make mistakes, half (51 percent) say God learns and adapts to different circumstances.

Almost 7 in 10 Americans (67 percent) say God accepts the worship of all religions, including Christianity, Judaism and Islam. A similar percentage (71 percent) say there is one true God in three persons: God the Father, God the Son and God the Holy Spirit. 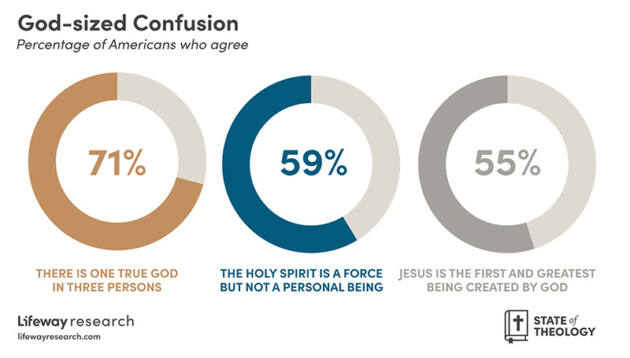 Despite a majority of Americans affirming a Trinitarian God with three divine persons, most still aren’t sure about how that applies to Jesus or the Holy Spirit. Slightly more than half (55 percent) believe Jesus is the first and greatest created being. Another 53 percent say He was a great teacher but not God. Close to 3 in 5 (59 percent) believe the Holy Spirit is a force but not a personal being.

When thinking about these theological convictions, most Americans classify them as opinions not facts. For 60 percent of U.S. adults, religious belief is a matter of personal opinion; it’s not objective truth.

“Many Americans think about God as if He had only revealed himself in a vague, nondescript way. They seem to fill in the gaps with whatever they want to believe,” McConnell said. “This creates sharp contrasts between what Americans believe about God and how He revealed Himself in great detail in the Bible.”

Hot button cultural issues often intersect with theological beliefs, and Americans often aren’t sure how to balance the two. A growing number says Christians should stay out of the discussion.

While 3 in 4 Americans (78 percent) say God created male and female, they’re more split on whether gender identity depends on personal preference. More than 2 in 5 (42 percent) say gender identity is a matter of choice, the highest in the history of the State of Theology. Half (51 percent) disagree. The American public is more divided than American pastors. A 2020 study of U.S. Protestant pastors found 72 percent believe it is morally wrong for an individual to identify with a gender different than the sex they were born.

Half of U.S. adults (53 percent) say sex outside of traditional marriage is a sin, while 42 percent disagree. Those who view non-marital sex as sinful has increased slightly but steadily since 49 percent said the same in 2016.

Americans are also split on whether the Bible’s condemnation of homosexual behavior is still applicable. Slightly less than half (46 percent) say it doesn’t apply today, and 42 percent disagree.

Additionally, Americans are closely divided over the issue of abortion. While 53 percent say abortion is a sin, 39 percent disagree. Still, a previous Lifeway Research study specifically on abortion found 12 percent of U.S. adults say abortion shouldn’t be legal in any situation. When asked specifically what time period they believe abortion should be a legal option assuming there are no health issues for the woman or the fetus, half of Americans say no later than 12 weeks.

Three in 10 Americans (30 percent) say Christians should stay silent on political issues, an increase from 24 percent in 2020 and the highest percentage recorded in any previous State of Theology study. Around 3 in 5 Americans (61 percent) disagree. 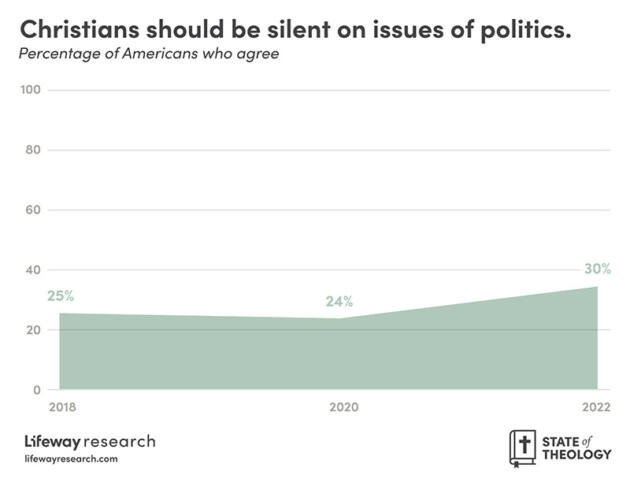 “Discussions of sin are inherently theological, because they explore whether God set standards and what behaviors miss this mark,” McConnell said. “So, those who acknowledge certain behaviors as sin are acknowledging a deity’s standards. This is a different discussion than whether society agrees on an ethical standard of conduct that we determine.”

Americans believe God cares about what we do each day, most people are generally good, but hell is a real place where some people will spend eternity in punishment.

While 58 percent of U.S. adults disagree, a growing number believe God is unconcerned with their day-to-day decisions. Around a third of Americans (32 percent) say God isn’t concerned with what they do on a daily basis, up from 25 percent in 2020 and the highest since the State of Theology first asked the question in 2014.

Still, 3 in 5 Americans (59 percent) say hell is a real place where certain people will be punished forever, up from 56 percent in 2020 and 54 percent in 2018. A quarter (25 percent) also believe even the smallest sin deserves eternal damnation, consistent with the 26 percent from 2020 after climbing up in each State of Theology study starting at 18 percent in 2014. 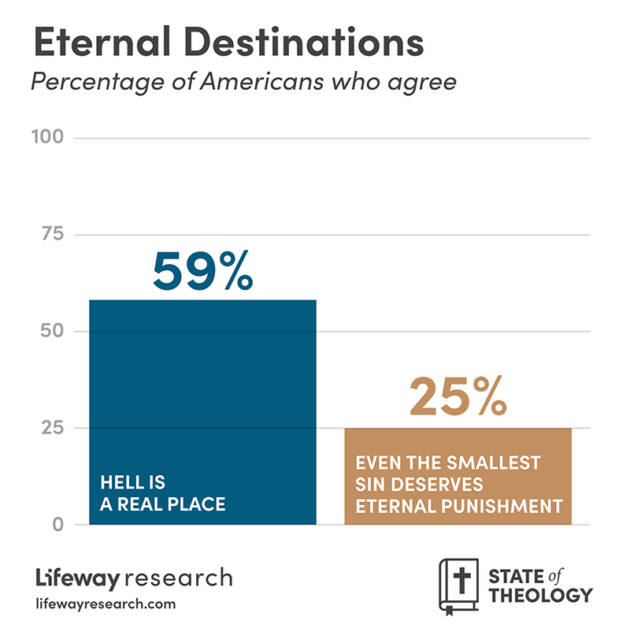 “An interesting paradox exists regarding Americans’ views of sin and punishment,” McConnell said. “More than two-thirds of Americans believe everyone is inherently good, yet almost as many believe divine judgement will occur in the future.”

Americans tend to trust the Bible, especially what it teaches about Jesus, but may have some doubts in other areas.

Two in 3 U.S. adults (66 percent) say biblical accounts of the physical or bodily resurrection of Jesus are completely accurate. They believe the event actually occurred. 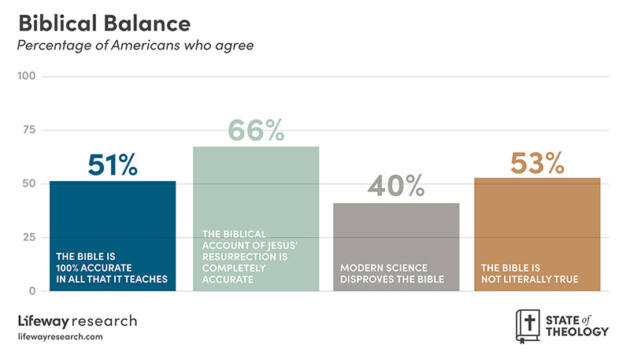 In many ways, Americans are split on the trustworthiness of the Bible. Around half say the Bible is 100 percent accurate in all that it teaches (51 percent) and the Bible has the authority to tell us what to do (52 percent); however, 53 percent of Americans say the Bible, like all sacred writings, contains helpful accounts of ancient myths but is not literally true. And 40 percent say modern science disproves the Bible.

“As a society, views on the Bible probably best summarize how split Americans are when it comes to theology,” McConnell said. “Half see Scripture as dependable and authoritative while half see it as fiction. Higher numbers acknowledge the story it tells, but more than half also give weight to their personal opinions.”

Previous: Have we reached the point of crisis news fatigue?
Next: Venezuela empties prisons, sends violent criminals to US border