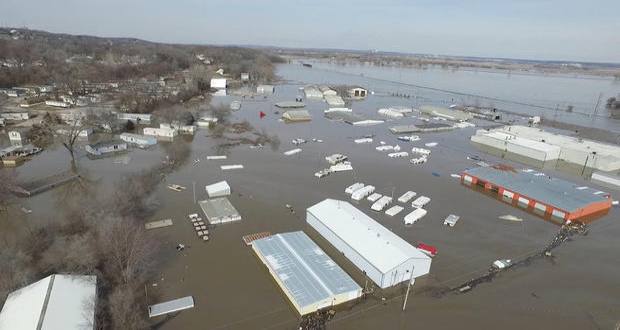 The historic flooding that inundated Nebraska and other parts of the central U.S. this month has been so devastating that the damage can be seen from space.

Stunning images released by NASA show the extent of the flooding in several Nebraska communities west of Omaha and between the Elkhorn and Platte Rivers, which completely flooded or became islands as water rose from both sides.

The intense late-winter storms forced residents in dozens of communities to evacuate.

According to NASA, a unique confluence of circumstances, including extreme winter cold that created a thick layer of ice on waterways, led to the flooding.

“When an intense storm brought downpours and unusually warm air to the region in March, it rapidly melted much of the snow and ice, producing enormous runoff in a short period,” the space agency explained in a statement.

“As river ice broke up, large chunks compounded the problem by slamming into dams, raking against levees and other infrastructure, and packing together to jam waterways even more,” NASA added.

The torrent of water from heavy rainfall spawned by last week’s “bomb cyclone” and snowmelt has led to devastating flooding across several Midwestern states, including swamping a major Air Force base in Nebraska that’s key to the nation’s nuclear attack response. 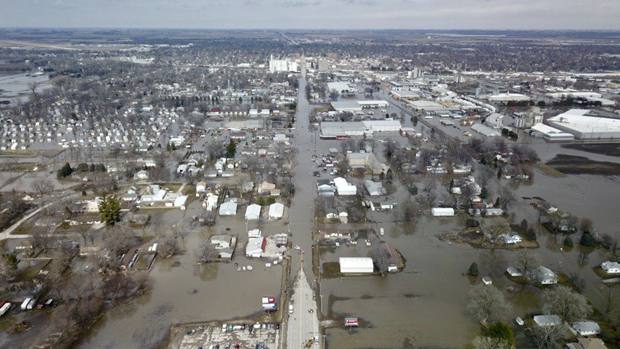 One-third of the Offut Air Force Base was underwater and 30 buildings were damaged and engulfed by up to 8 feet of water, according to the Omaha World-Herald. In addition, 3,000 feet of the base’s 11,700-foot runway was submerged.

Airmen from the 55th Wing had been filling thousands of sandbags in a round-the-clock effort to fortify facilities but were forced to give up after filling 235,000 sandbags and preparing 460 flood barriers.

“It was a lost cause,” Blake told the World-Herald. “We gave up.”

Disaster recovery crews are expected to arrive by the end of the week to begin work when floodwaters fully recede.

“The wheels are in motion but remember – it will likely take months and months and the SE side of the base will never look the same,” he wrote.

Nine aircraft of the 33 reconnaissance jets based at the facility were able to be flown out before the runway was flooded, according to Manion.

One of the planes was a Boeing-made E4-B plane, which is meant to serve as an aerial command center in case of national emergency or destruction of ground bases in an event such as a nuclear attack, Reuters reported. 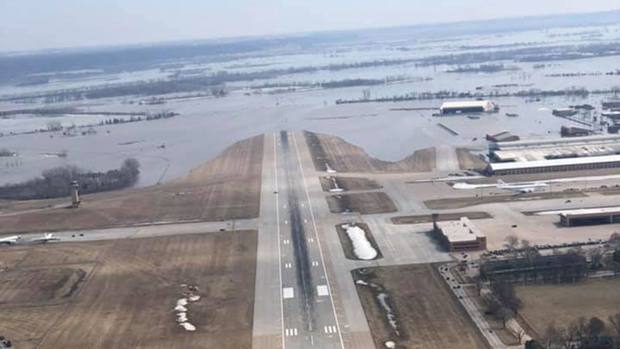 The runway at Offutt Air Force Base can be seen covered by floodwaters from the Missouri River. (55th Wing Commander/Facebook)

The base is also the location of the U.S. Strategic Command, which oversees the country’s nuclear arsenal. The Strategic Command headquarters is set on a hill and was not affected by the floods, and neither was its new $1.3 billion building.

Satellite photos released by NASA show the extent of the flooding in Nebraska, particularly along the Platte, Missouri and Elkhorn Rivers. 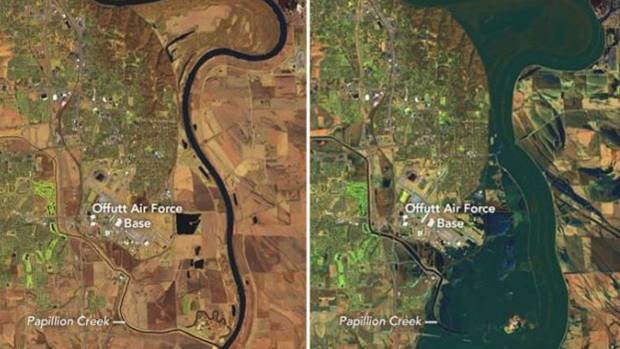 The above images, courtesy of NASA, show the extent of flooding on the Platte, Missouri, and Elkhorn Rivers, at right. The image at left shows the same area in March 2018. (NASA) 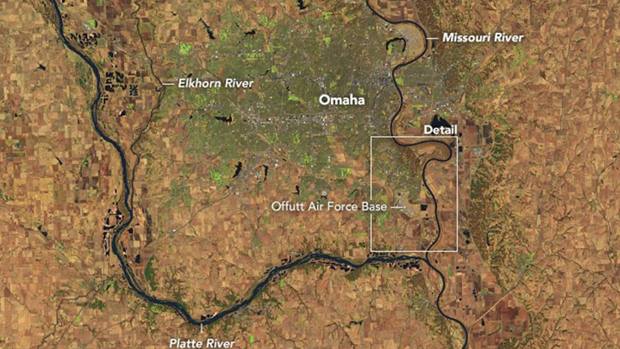 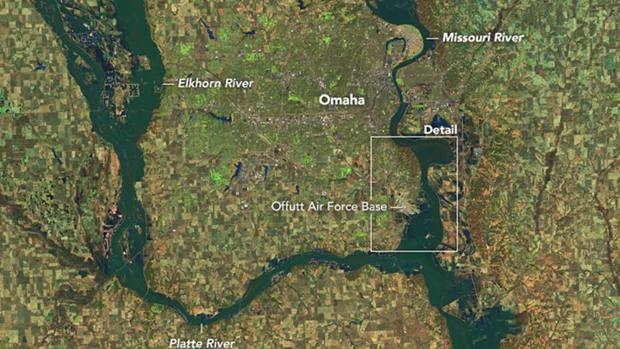 The flooding in Nebraska can be seen in this satellite photo from March 16. (NASA)

At least 3 deaths were blamed on flooding, and two other men have been missing for days.

While river depths are starting to level off in parts of Nebraska, the water is so high in many places that serious flooding is expected to remain for several days. And downstream communities in Kansas and Missouri are bracing for likely flooding.

The rising Mississippi River also was creating concern. The Mississippi was already at major flood level along the Iowa-Illinois border, closing roads and highways and swamping thousands of acres of farmland. Moderate Mississippi River flooding was expected at several Missouri cities, including St. Louis.

Nebraska Governor Pete Ricketts says farmers are bearing the brunt of “the most widespread destruction we have ever seen in our state’s history.”

Rickets declared a state of emergency as more rain is expected to soak the already flooded region. States of emergency have also been declared in Iowa, Wisconsin and South Dakota. Record-setting flooding has forced more than 4,400 people to evacuate their homes.

Fully two-thirds of the state is now under a state of emergency.

“Obviously we’ve got a lot of recovery left ahead of us,” Ricketts said. “It’s going to be a long road for us to rebuild our infrastructure and get people back in their homes.”

Estimated farm losses could top $1 billion in livestock and grain, and 14 state bridges were damaged along with 200 miles of highways that can’t be used until roads are repaired.

Total losses in Nebraska are now estimated to be over $1.3 Billion.

Ricketts said recovery will be “a months-long process” and referenced a 2011 flood, where it took 108 days for the waters in one region of Nebraska to recede before farmers could access their water treatment plant.

“We know this will be a long recovery,” Ricketts said. “We will work as quickly as possible to get people back in their homes to provide that relief.” 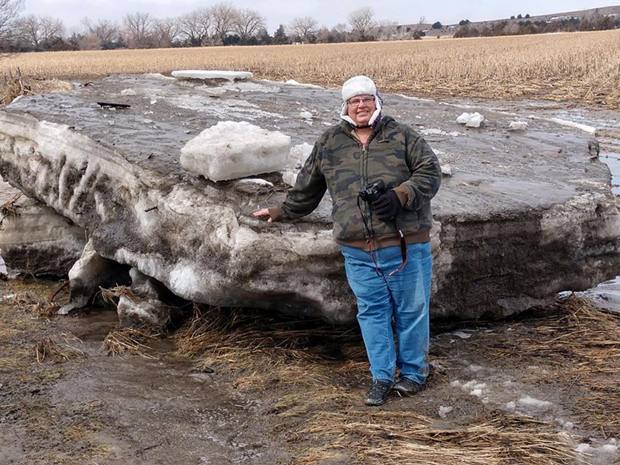 This piece of ice was in the middle of a cornfield about 2 blocks from where the Niobrara River used to run near Spencer, NE. This is 5 miles west (upriver) from the now totally destroyed Spencer Dam just off HWY 281. Photo: Renice S Bales

–foxnews.com and other wire services