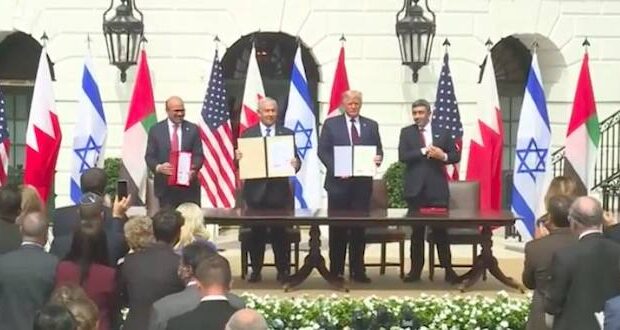 Regardless of the outcome of the U.S. election, one legacy of the Trump administration is the historic success at Middle East peace. That was on display on Wednesday as U.S. Secretary of State Mike Pompeo welcomed Bahrain’s and Israel’s commitments to open embassies, establish online visa systems, and launch weekly flights between the countries soon, in broadened cooperation on the basis of the Abraham Accords brokered by the Trump administration.

The accords’ goal is to advance prosperity and counter Iran’s destabilizing activity in the region.

Pompeo met with Israel’s Prime Minister Benjamin Netanyahu and Bahrain’s Foreign Minister Dr. Abdullatif bin Rashid Al Zayani in Jerusalem, to discuss the historic Abraham Accords and “the path to peace, stability, and security in the region,” according to a State Department statement.

“The United States welcomes the exchange of letters that will enable the opening of embassies in each respective country — a truly historic step for building warm and fruitful diplomatic ties,” Pompeo said at a joint press conference before the trilateral meeting.

“We’re pleased, too, that Israelis will now be part of Bahrain’s e-visa system, a truly remarkable achievement in normalizing relationships and easing travel between the two nations,” he added.

Pompeo pointed out that “these agreements also tell malign actors like the Islamic Republic of Iran that their influence in the region is waning and that they are ever more isolated, and this shall forever be until they change their direction.”

The accords will also “advance religious freedom,” Pompeo said. Once new flight connections from Bahrain and the United Arab Emirates to Israel are launched, “Muslims will be able to more easily pray at the al-Aqsa Mosque” in Jerusalem, Pompeo said.

On the first official ministerial visit by Bahrain to Israel, Al Zayani said that the talks would center on practical means to achieve the objective of the Sept. 15 deal normalizing relations.

Bahrain expects to establish up to 14 weekly flights from Bahrain to Tel Aviv starting next year, as well as flights to the smaller Israeli destinations of Haifa and Eilat, and up to five weekly cargo flights, Al Zayani said.

To facilitate travel, Bahrainis and Israelis will be able to apply online for entry visas as of Dec. 1, Al Zayani announced.

Both countries will also reciprocally open their embassies, Al Zayani said, adding, “I am therefore confident that this emerging cooperation between Bahrain and Israel will pave the way to a dawn of peace for the entire Middle East.”

The success in brokering the Abraham Accords owes to President Donald Trump’s different approach from the common understanding on how “how to create security for the Middle East,” Pompeo said in an interview in September.

“The Trump administration recognized “that the central challenge in the Middle East wasn’t the conflict between Israel and the Palestinians, but rather the challenge that is presented by the Islamic Republic of Iran and their anti-Semitic terrorist campaign all around the world,” Pompeo explained.

“The peace between Israel and Bahrain is built on solid foundations of mutual appreciation and shared interest,” Netanyahu said at the press conference. The Abraham Accords made it possible “to enable the free flow of ideas, innovators, entrepreneurs between Israel and Bahrain, both directions. And we are unleashing a tremendously potent economic force and a force for peace for the benefit of both our peoples,” Netanyahu said.

Israeli Foreign Minister Gabi Ashkenazi, who is due to visit Manama, Bahrain, next month, said he hoped opening ceremonies for the embassies would be held by the end of 2020.

Sudan followed Bahrain and UAE in announcing last month it would move toward ties with Israel.