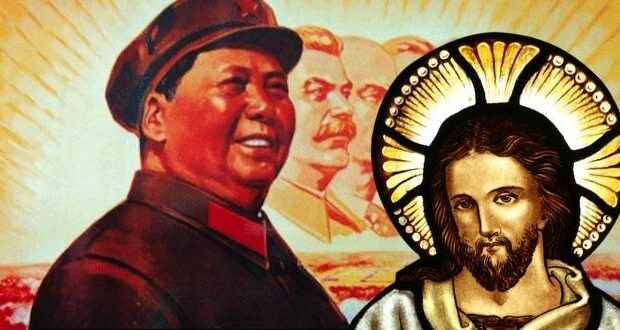 Christians in China are now being forced to replace paintings of Jesus in their homes with pictures of infamous Chairman Mao. The revelation came from Secretary of State Mike Pompeo who is urging the Roman Catholic Church to take a greater stand against the religious persecution in China.

Pompeo spoke out Wednesday, saying today the church has the responsibility to fight for basic human rights, like religious freedom. He pointed specifically to the cases of abuse against Catholics in China.

“Catholic churches and shrines have been desecrated and destroyed. Catholic bishops like Augustine Cui Tai have been imprisoned,” Pompeo said.

“Catholic lay leaders in the human rights movement, not least in Hong Kong, have been arrested. Authorities order residents to replace pictures of Jesus with those of Chairman Mao and those of General Secretary Xi Jinping,” he continued.

Pompeo’s comments came during a religious freedom convention in Italy.

One villager recounted that officials tore down the Christian images in his home and replaced them with a portrait of Mao Zedong.

The believer quoted the official as saying, “Impoverished religious households can’t receive money from the state for nothing — they must obey the Communist Party for the money they receive.”

The report went on to document several instances where believers lost their support and benefits from the state merely for expressing religious sentiments or displaying religious symbols.

The Communist Party of China has seen renewed criticism for its efforts at repressing the beliefs of the Uighur community, a Muslim sect, as well.

On Sunday, a Chinese ambassador denied the existence of detention camps despite drone footage that appeared to show hundreds of bound and blindfolded Uighur prisoners being led onto trains by armed soldiers in Xinjiang.

In June, President Donald Trump signed legislation condemning the Chinese government for the detainment of members of ethnic groups including the Uighurs. Some have been subjected to torture, forced labor and other deprivations in the camps. The bill passed overwhelmingly in both houses of Congress.

Secretary of State Mike Pompeo has made it clear that the U.S. is opposed to Chinese repression of religious liberty.

“In China, state-sponsored repression against all religions continues to intensify,” Pompeo said, according to the Associated Press. “The Chinese Communist Party is now ordering religious organizations to obey CCP leadership and infuse communist dogma into their teachings and practice of their faith. The mass detentions of Uighurs in Xinjiang continues.”

While overseas the secretary of state will hold a meeting with the Vatican foreign minister. But due to the nearness of the US presidential election, Pompeo will not have an audience with the Pope.