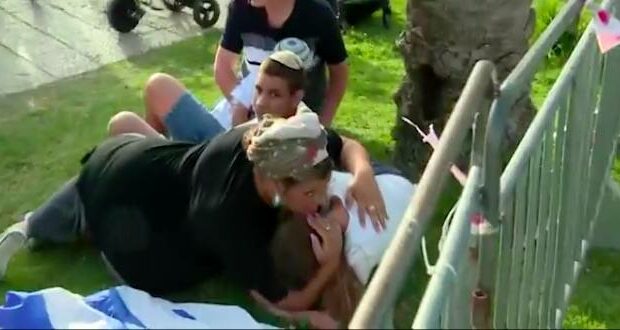 Israelis drop to the ground as air raid sirens go off in Jerusalem.

The Israeli army reports that the chief of staff has called in troop reinforcements in the country’s south, as tensions continue to rise, despite international calls for a ceasefire.

Israeli Defense Minister Benny Gantz has ordered the mobilization of 5,000 reserve troops to expand the current campaign “and deepen home front defense,” according to Israeli media. The troops will be stationed in the nation’s south near the terrorist enclave of Gaza as Israel responds with targeted strikes against missile launch sites run by Hamas.

It comes as a fourth day of tensions between Israel and Arab Palestinians resulting from police attempting to stop riots on the Temple Mount last week. 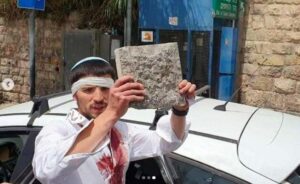 A Jewish driver holds up the brick that Palestinians used to attack him as he drove through Jerusalem.

Over the last two days Palestinians fired uninterrupted barrages of rockets into Israel. The Israeli Defense Forces responded with airstrikes on Gaza on Monday.

One Israeli, who lives in Jerusalem, told Metro Voice readers to “Please pray for the peace of Jerusalem. She recounted how rockets and arson fires have set forests around the country ablaze. “My son is a volunteer ambulance driver and was on the scene,” she said. “How would Americans feel if Washington DC was bombed on the Fourth of July?”

On Monday, the terrorist leader of Gaza fired rockets towards Jerusalem. Israel’s Iron Dome defense system destroyed many but rockets and shrapnel landed in and around the Holy City. Dozens were injured by the attack including Jews and Palestinians.

Israel responded by pounding launch sites in Gaza in the early morning because Hamas uses school courtyards as launch pads and Israel attempted to take the sites out before children returned to school for the day. Two Palestinians were killed and more than 100 wounded in airstrikes, Palestinian officials said.

Hamas said that nine children were among the 20 dead in Gaza but outside sources could not confirm the number. 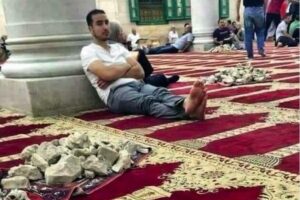 A Palestinian rests inside the al-Aqsa Mosque next to a pile of rocks used to attack police and Jews.

It was the first time Jerusalem came under attack since a 2014 war.  Prime Minister Benjamin Netanyahu said the rocket attacks crossed a “red line.”

The increase in violence on Monday came as Israel celebrated “Jerusalem Day,” marking the reunification of Jerusalem by Israel in the 1967 war in which the country was attacked by eight of its Arab neighbors.  East Jerusalem had been under Jordanian occupation since Israel Israel’s war of independence in 1948 when the city was split.

The escalation began with confrontations at Al-Aqsa Mosque in the heart of the walled Old City on the compound known to Jews as Temple Mount and to Muslims as the Noble Sanctuary—the most sensitive site in the Israel-Palestinian conflict.

Social media posts show that Palestinians filled the mosque with rock and took brick pavers up from the streets to be used as weapons against Jews worshipping in the area.

The Palestine Red Crescent Society said more than 300 Palestinians were injured in clashes with Israeli police, who fired rubber bullets, stun grenades and tear gas in the compound. Police said 21 officers were hurt in the skirmishes.

Hundreds of Jews and Christians had been injured by rock-throwing Palestinians. In once instnace,  a Jewish driver was dragged from his car and beaten.

Hamas, the Islamist terrorist group that controls Gaza, set an evening deadline for Israel to remove its police from Al-Aqsa and Sheikh Jarrah. When it expired, sirens wailed in Jerusalem and rockets pounded the city’s outskirts.

Arab Palestinians continue to call for Jerusalem to again be split with the former East Jerusalem decalred the capital of a state they seek in Gaza and Judea and Samaria – the heart of biblical Israel called the “West Bank” by media and Arabs.

Tension had been building for weeks during the Muslim holy month of Ramadan, amid clashes between Israeli security forces and Palestinian protesters prompting international concern that events could spiral out of control.

It is unusual for Hamas to attack Jerusalem with rockets. The city is revered by the world’s three monotheistic religions – Judaism, Islam and Christianity. Arab Palestinians living in the former East Jerusalem neighborhood are full Israeli citizens with all the rights and privileges of a democratic nation.

Polls have shown that Palestinians in the West Bank are dissatisfied with the Palestinian Authority but have few options to the current regime. Elections were recently called off by Palestinian President Mahmoud Abbas when it appeared the terrorist group Hamas could win seats and possibly take over leadership of the territory.

Some believe that the current violence is a result of weak leadership from the Biden administration which has made statements that many believe has emboldened the Palestinians.