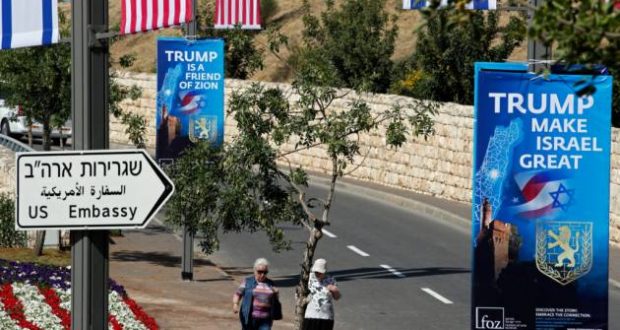 Israel’s newest planned city to be named after Trump

After a historic win in recent elections, Israeli Prime Minister Benjamin Netanyahu will make a nod to Donald Trump’s rock stars status in Israel. Netanyahu says he will name Israel’s newest ultra-modern planned city in the Golan Heights after Trump, who recently recognized Israel’s sovereignty over the strategic plateau.

Netanyahu made the announcement while visiting the Golan–which Israel won from Syria after Syria and four other Arab nations attacked Israel starting the Six-Day war in 1967. Israel defeated all the armies and recaptured much of the land that comprised ancient Israel in the Bible. Syria had used the high hills of the Golan to fire rockets at Israeli communities including schools and shopping centers for decades prior to the war.

“All Israelis were deeply moved when President Trump made his historic decision to recognize Israel’s sovereignty over the Golan Heights,” the prime minister says in a video.

See what a typical planned Israeli city looks like:

“Therefore, after the Passover holiday, I intend to bring to the government a resolution calling for a new community on the Golan Heights named after President Donald J. Trump.”

Israel currently has one of the world’s strongest economy and thousands of people continue to move to the tiny nation each week. In a recent poll, Israeli’s were also found to be some of the happiest people on earth, contradicting the popular media myth that Israel is consumed by conflict.

Trump made history last month by signing a proclamation recognizing Israel’s sovereignty over the Golan Heights.

The decision reversed 52 years of US policy but Trump said it “should have been done numerous presidents ago.”

While Israel captured the Golan Heights from Syria during the 1967 Six-Day War, its sovereignty over the area is still not recognized by the international community while at the same time, recognizing other nation’s sovereignty over territory captured during conflicts.

The United Nations Security Council’s Resolution 497, one of many duplicitous resolutions when it comes to Israel, declared Israel’s decision to control the Golan “null and void and without international legal effect.”

Israel views the Golan as strategic for fending off Iranian-sponsored terrorists in Syria and Lebanon.

“I am taking historic action to promote Israel’s ability to defend itself and have a powerful national security which they’re entitled to have,” Trump said.

Previous: What’s the real cost of free college tuition?
Next: City of Topeka announces emergency month-long closure of 21st Street Bridge over I-470