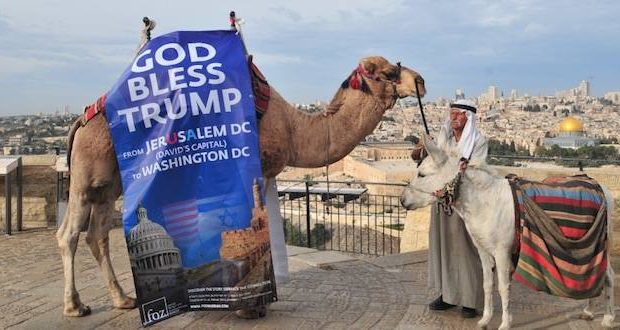 Israelis give historic rock star status to the name ‘Trump’

What’s in a name? Israeli’s joke that President Donald Trump could run against Benjamin Netanyahu in the upcoming April elections for prime minister…and win hands down.

So popular is the American president, everyone from local city councils, to mayors to park boards and even a soccer club are naming, or renaming, things after him. And it’s not just Jewish Israeli’s. Many arab and Christian Israelis also support him for the support of their nation.

From new highway roundabouts to playgrounds to parks, bridges and streets, the name Trump is overtaking some historic figures in terms of place names. In fact, the new state-of-the-art underground train station in Jerusalem may also bear the name Trump if local leaders get their way. Transportation Minister Israel Katz announced he would name the train station near the Western Wall after the US president.

And Israelis don’t seem to mind. Michael Oren, who served Israel’s Ambassador to the United States during the Obama administration, stated that President Trump has done more for Israel than any American president–including Harry S. Truman–and has endeared himself in the hearts of Jews in the U.S. and Israel. That’s a big feat as it was Truman who, ignoring the advice of his own State Department,  first gave his support for Israel’s declaration of Independence in 1948.

“President Trump,” stated Oren, has surpassed the actions of Truman and is “is the best American President Israel has ever dealt with.” Oren made the statement in December at a private meeting which I attended at the Knesset.

Israelis, known for their cynicism, and rightly so after the Holocaust, failed promises from world leaders and continued hostility from the United Nations, don’t easily heap praise or faith on a single individual unless they perceive the truest sense of sincerity.

They see that in President Trump.

So far, the biggest project named after the president may be the new “embassy row” or embassy district in Jerusalem.

Construction Minister Yoav Gallant has instructed the top officials in his ministry to begin the process of planning and approving a new district for embassies from countries around the world that will be built in Jerusalem.

Gallant suggested a couple possible names for the area where the embassies would be located. He initially called it “Embassy Town,” but then said he may decide to instead call it “Trump Town.”

If that name is indeed given to the embassy quarter, it would not be the first site in the capital named after Trump by a minister in Prime Minister Benjamin Netanyahu’s government.

Gallant suggested locations for the district at the entrance to Jerusalem near the Jerusalem-Tel Aviv highway, in the city’s southwest corner near Hadassah Medical Center’s Ein Keres campus, and in Jerusalem’s Talpiot neighborhood. He said he also would not rule out building the quarter in suburbs of Jerusalem, such as Mevaseret Zion and Neveh Ilan.

“These are the first initial thoughts on the issue,” Gallant said. “I want the site to be attractive for countries to move there.”

The support for Trump doesn’t just rest with the Prime Minister’s party or other conservative parties. It’s broad based, as it is with the public in general.

“I am thrilled that the US Embassy move has been the catalyst to other countries to finally recognize the reality that Jerusalem is and always will be the capital of Israel,” said City Council member Fleur Hassan-Nahoum, the leader of the Yerushalmim party.

The embassy move and other policies Donald Trump has implemented have now secured him as an icon in Israeli culture. That was made evident when one of Israel’s most famous soccer teams made a huge change.

The club announced the change in a statement on Facebook a day before the official opening of the new U.S. embassy, saying it wanted to pay tribute to Trump’s “courageous move.”