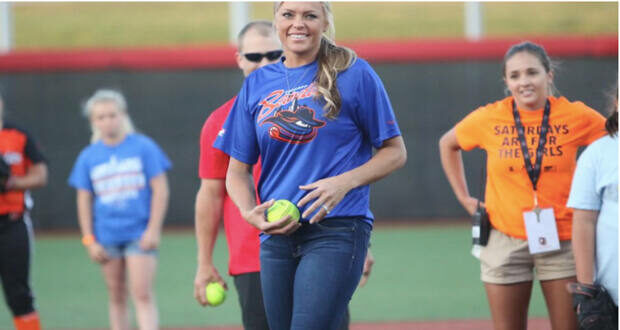 If anyone knows what it’s like to win, it’s Olympic medal winner Jennie Finch.

At the height of her game, the famed right-handed softball ace was simply unbeatable. Major League Baseball All-Stars cowered at the thought of batting against her. The 2001 Women’s College World Series saw her showcase championship stuff. The 2004 Summer Olympics witnessed her gold-medal domination. Ditto for USA Softball, which saw her take seven titles, and the University of Arizona, for whom she went 119-16 with more than 1,000 strikeouts and an earned run average of just 1.08.

When reflecting on her prestigious career, however, the 37-year-old Finch doesn’t hold any of her marvels from the mound as particularly satisfactory — at least compared to her belief in the God she says blessed her with so much talent.

And, of all places and times, the turning point for that attitude occurred when she won gold at the Olympics.

“There is so much more than that gold medal,” Finch said on the Sports Spectrum podcast earlier this year. “God was speaking to me and saying, ‘This is going to tarnish one day.’ And part of me had to chuckle at the time, because I was like, ‘God, really? You’re going to use this moment to tell me I’m not nearly as cool and awesome and amazing as I thought I was and the world thinks I am right now?’ … But I’m so thankful, because what a testimony it is.”

That testimony, according to Finch? It’s all about making clear that, regardless of your personal achievements or otherworldly success in softball, the thing that truly matters lies beyond this world.

“We can get caught up in so many other things, and it’s like all of this is going to fade away one day,” she said, “but our hope in Him is for eternity, and that’s what we’re living for … we can always come back to that if we know and love and believe in Jesus Christ.”

Was Finch great at her game? Yes. And did she embrace her dominance? Yes.

“This was a God-given gift and talent,” she said.

Above all, though, her message is this: God is greater than His gifts. And He is the greatest of all.

A two-time Olympian who also won silver at the 2008 Beijing Games, Finch went a perfect 32-0 during her junior year at Arizona, striking out 279 and logging a 0.54 ERA en route to a national championship. Named by the NCAA the No. 2 greatest college softball player, she retired in 2011 before operating Jennie Finch Softball Camps across the country and establishing her own softball academy in New Jersey.