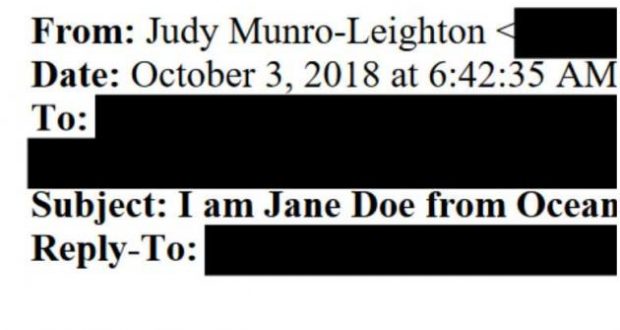 Kavanaugh rape accuser now admits she lied, says it was a ploy

A women who accused Judge Brett Kavanaugh of raping her, and sent her allegations to Democrats touching off a lengthy investigation has admitted she lied. Judy Munro-Leighton’s admissions came during questioning by committee investigators and has now been revealed publicly.

Senate Judiciary Chairman Chuck Grassley revealed her testimony as part of push to seek possible criminal probe against people whose accusations appeared the most bogus.

During his confirmation hearings before the United States Senate, a number of women made what later turned out to be unsubstantiated claims that Justice Brett Kavanaugh had sexually assaulted them or observed sexual assaults against other women.

Many of those claims have been found wanting in light of additional FBI investigations, for lack of evidence, or as witnesses who say none of these sexual assaults ever happened came forward.

Judy Munro-Leighton claimed Kavanaugh had raped her and now admits they’ve ever even met. Her email to her Congresswoman, along with that of Christine Ford, touched off the Democrat efforts to stop the confirmation of Kavanaugh.

Grassley has now referred Judy Munro-Leighton for criminal prosecution and revealed her actions were part of a ploy to take down Kavanaugh’s nomination.

Under questioning by Committee investigators, Ms. Munro-Leighton admitted, contrary to her prior claims, that she had not been sexually assaulted by Judge Kavanaugh and was not the author of the original “Jane Doe” letter.  When directly asked by  Committee  investigators  if  she  was,  as  she  had  claimed,  the  “Jane  Doe”  from  Oceanside  California who had sent the letter to Senator Harris, she admitted: “No, no, no.  I did that as a way to grab attention.

Regarding  the  false  sexual-assault allegation she made via her email to the Committee, she said: “I was angry, and I sent it out.” When asked by Committee investigators whether she  had  ever  met  Judge  Kavanaugh,  she  said:  “Oh Lord, no.” 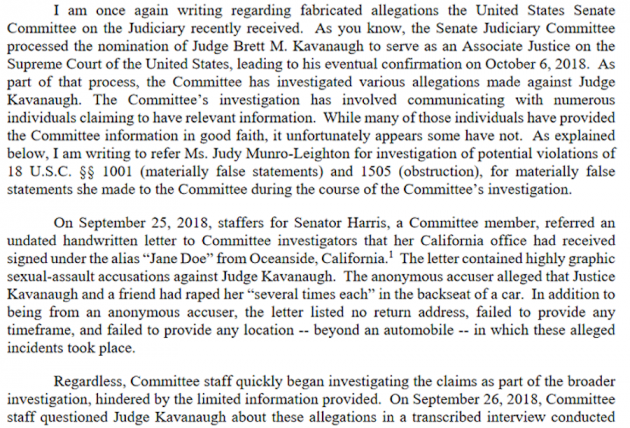 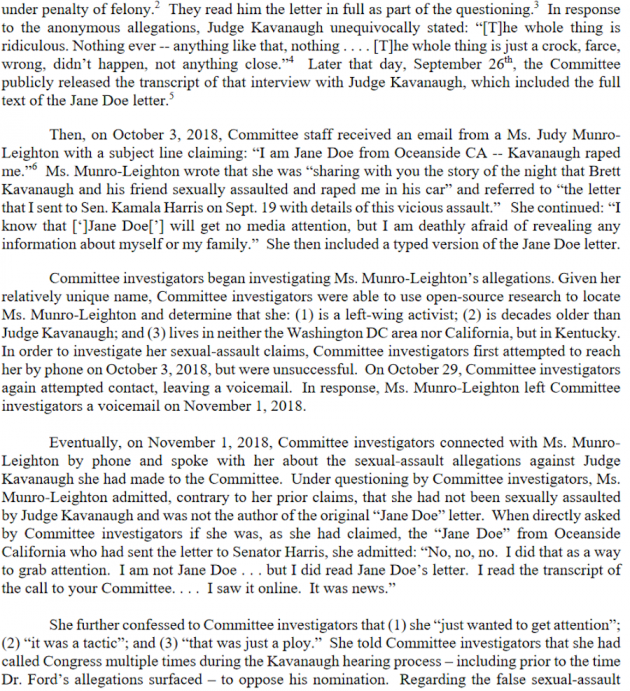 Last month, Grassley referred Julie Swetnick and her lawyer Michael Avenatti to the Department of Justice for a possible criminal investigation over allegations they made false statements to Congress. Swetnick was the third woman to accuse Judge Brett Kavanaugh of sexual misconduct, and she appeared to have invented wild claims of rape trains and parties she and Kavanaugh allegedly attended, despite no proof or evidence supporting the claims, where women were drugged and raped.

Swetnick, who is being represented by Michael Avenatti, sent a declaration to the Senate Judiciary Committee claiming that she attended house parties in the early 1980s where she saw Kavanaugh mistreating women and spiking their drinks.

But now the pair may be held liable for the apparently false claims.

Kavanaugh previously served on the U.S. Circuit Court of Appeals for D.C. for more than a decade, where he developed an extensive record of protecting religious liberty and enforcing restrictions on abortion. Pro-life leaders believe he will do the same on the U.S. Supreme Court.

He may have his first chance to issue a ruling related to abortion over a possible case on an Indiana law protecting babies with Down Syndrome from abortions.

Previous: Chelsea Clinton says it’s “un-Christian” to oppose abortion
Next: Brazil elects their own “Trump” partly due to Christian vote