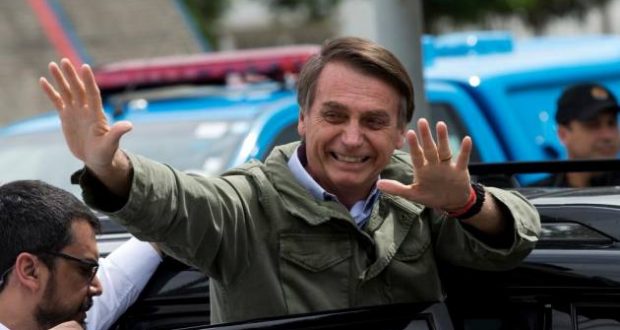 Brazil elects their own “Trump” partly due to Christian vote

Brazil has elected conservative Congressman Jair Bolsonaro as their new president, and evangelical Christians played a major role in his victory.

His election reflected widespread anger at the political class after years of corruption, a struggling economy, and a surge of violence in the largest country in South America. South American media called him the “Brazilian Trump” for eerie similarities between the two campaigns and outsider status.

Bolsonaro ran on promises to clean up Brazil and bring back traditional values. He told his supporters that, “it’s a promise to God.”

According to The Associated Press, evangelical voters played a big part in his election.

Bolsonaro was backed by no major political party and had little advertising time purchased on television and radio. However, with evangelical support, he did have grassroots organizing. According to Reuters, his evangelical volunteers would distribute flyers and other campaign material and talk up the candidate to their friends and neighbors.

Even though Brazil is home to the world’s largest number of Catholics – 123 million – evangelicals are now growing in numbers too. They now total 42 million and makeup 20 percent of the country’s total population.

“The evangelical vote is very organic in that pastors and bishops have a relationship with followers that influences how they vote,” Antonio Lavareda, who has written several books on Brazilian politics, told the AP. “It’s the opposite in the Catholic Church, where, despite having more congregants, priests have less direct influence.”

Evangelicals already have a large influence in national politics, according to the AP. The so-called “evangelical bloc” in Congress is made up of 87 representatives and three senators, about 15 percent of all federal lawmakers. Many evangelical leaders frequently run for office.

Evangelicals also use the media to spread the gospel message. Edir Macedo, the founder of the Universal Church of the Kingdom of God, owns Record TV, one of the largest broadcasters in Brazil. Many churches also buy a lot of airtime and as a result, a viewer can watch religious programs on Brazilian television at just about any time of day.

Pastor Silas Malafaia, an influential church leader with more than 50 churches, told the AP in a recent interview that he makes no apologies for trying to influence how his church members vote. He was an outspoken supporter of Bolsonaro for Brazil’s highest office.

“In Brazil, we need a macho like him,” Malafaia said, adding that Bolsonaro will “defend all the values and principals of the Christian family.”