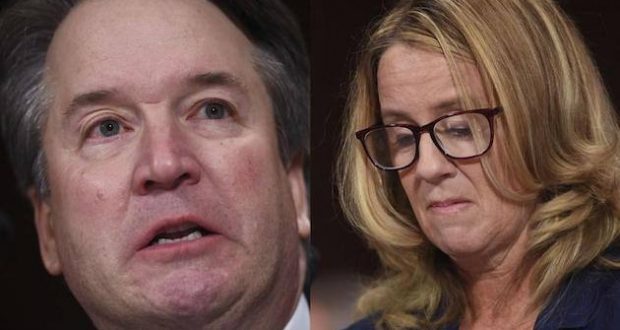 The nation was riveted by Thursday’s dramatic and historic testimony at a Senate hearing featuring Supreme Court Nominee Brett Kavanaugh and Christime Ford who accuses him of sexual assault 36 years ago when the two were in high school. Now it’s up to a few senators from both parties to decide if he’ll be confirmed, and the voting process begins Friday morning.

The intense hearing gripped the nation for an entire day. Dr. Christine Blasey Ford and Judge Brett Kavanaugh both gave emotional testimonies about what they remember from 1982.

Metro Voice talked to several individuals who watched the proceedings. While they said Ford’s testimony was strong, it was the impassioned statements of Kavanaugh that brought them to tears.

“I was in tears listening to this man,” said one woman. “I could tell he was telling the truth.”

It began with an accusation of sexual assault from Ford, followed by the strong and often tearful denial from Judge Kavanaugh.

CBS New anchor John Dickerson said after Kavaluagh’s testimony that the emotion of a man who believes he is wrongly accused and wept through parts of his defense “made you want to look away” so uncomfortable was it to witness.

“I am here today not because I want to be. I am terrified,” she told the Senate panel. “I am here because I believe it is my civic duty to tell you what happened to me while Brett Kavanaugh and I were in high school.”

Ford described the traumatic moment 36 years ago naming witnesses but had no answer when the prosecutor asked why all of her witnesses, including her best friend at the time, continue to deny the event ever happened.

“Brett groped me and tried to take off my clothes,” she said. “I believed he was going to rape me.”

She said she has no doubts it was Brett Kavanaugh and Mark Judge who were in the room and attacked her. Judge, for his part, has signed affidavit under penalty of imprisonment, denying the event ever happened.

Sen. Patrick Leahy (D-VT) asked her, “What is the strongest memory you have?”

Ford replied, “The uproarious laughter between the two. And their having fun at my expense.”

Further questioning revealed some inconsistencies in her time-line and previous statements she has made.

Ford had said she hates to fly and democrats had used that as a reason why Ford had not traveled to Washington earlier. During questioning, Ford admitted that she flies regular and, in fact, traveling is one of her passions, admitting that she flies internationally regularly on pleasure trips.

It also came out that Kavanaugh was in the Washington area during several weeks before her accusations were made public. At the time, Democrats had said she was in California. Republican had even made an offer to fly to California, now having been told she was right there in town.

Then Judge Kavanaugh took his turn where he categorically denied her claims.

“I’m here today to tell the truth. I’ve never sexual assaulted anyone, not in high school, not in college, not ever,” Kavanaugh said.

He said while he believes something may have happened to Dr. Ford, he did not do it. He provided his meticulously detailed calendar from 1982, which included substantial information about where he was and what he was doing every day single day of the summer, arguing that it was evidence that he couldn’t have been at the party where the attack occurred.

Thee were only three weekend evenings in the entire summer where Kavanuagh would have ben in the DC area and he provided evidence, dates, times and the names of people who could corroborate that he was with them on those dates. All other dates were filled times, names of individuals and activities that showed where he was just about every hour of each day.

He became emotional, repeatedly fighting back tears as he talked about the impact of the accusations on him and his family. His testimony seemingly caught Democrats and Republicans off guard. Even liberal media observers say he came out swinging, defending himself with a recall of the facts and evidence that supports his innocence with a passion and confidence  of someone who has been wrongly accused. For Kavanaugh, the consequences of the false allegations are destroying not only his life but that of his entire family, he pled.

Kavanaugh said, “The other night, Ashley and my daughter, Liza, said their prayers. And little Liza – all of 10 years old – said to Ashley, ‘We should pray for the woman.’ That’s a lot of wisdom from a 10-year-old.”

Kavanaugh told how this process has damaged his family and destroyed his good name… consequences that will follow them for decades. He pointed out his lifelong goals of helping women advance in the judiciary and teaching the next generation of children, but his reputation is so damaged he may never be able to teach law or to coach sports again.

Kavaugh shared a public record, not of harassment of women, but of ground-breaking esteem for women in the judicial system. He holds the record for advancing the largest number of female interns to positions that any other judge in history. He shared how, as is normal, he had already assembled a possible intern staff for what was thought to be his confirmation to the Supreme Court. It would have been the first time in history a Supreme Court justice relied entirely on a female intern staff.

“I love coaching more than anything I’ve ever done in my whole life. But thanks to what some of you on this side of the committee have unleashed, I may never be able to coach again,” he said through tears.

But Kavanaugh didn’t just refute the allegations with facts and evidence that proved his innocence, democrats squirmed in their seats as they were called out for the how they have handled the nomination and accusations.

Kavanaugh confronted Democrats head-on, calling the process an orchestrated and calculated political hit job. Looking directly at committee members, Kavanaugh named no names. But democrats realized the entire world was looking at them. Many kept their heads low and could not look Kavanaugh in the eye as he confronted them. That had perhaps has never been done in such a forceful and honest way during a senate hearing.

Democrat SenatorCorey Booker, who has actually admitted to sexual abuse of a woman in high school, looked particularly uncomfortable. His later questioning, while strong, still seemed tempered by his own admission of guilt. Come questioned if Booker should even be sitting in judgement of Kavanaugh in the first place.

That duplicity, while not mentioned by Kavanaugh, is sure to have fueled his the judge’s response to the committee.

Judge Kavanaugh assured senators no matter what, he’s not backing out of this process.

“You may defeat me in the final vote, but you’ll never get me to quit. Never,” he said.

As soon as it was their turn to speak, some Republicans unleashed their anger on Democrats for dragging Judge Kavanaugh and his family through the mud in an effort, they say, to score political points ahead of the midterms.

Sen. Lindsey Graham (R-SC) passionately pointed a finger of blame at the Democrats on the committee saying, “If you wanted an FBI investigation you could have come to us. What you wanted to do was destroy this guy’s life, and hold this seat open and hope you win in 2020, you’ve said that… This is the most unethical sham since I’ve been in politics.”

Sen. Orrin Hatch (R-UT) said, “This is a national disgrace, the way you’re being treated.”

“The hearings put the hypocrisy of the Democrats on full display,” he says. “When we all know that their number one objection to Judge Kavanaugh is that he might restrict in some way the murder of 700,000 females every year in the womb through abortion.”

Democrats continued to believe the accuser, even though no evidence has corroborated her story, and each of the witnesses she has named have signed affidavits saying her accusations against Kavanaugh are not true.

Sen. Dick Durbin (D-IL) said, “She was credible, calm. She told us she was terrified, but I thought she handled the questions professionally and honestly.”

But even Kavanugh days he does not doubt Ford was abused by someone. It was not him, he says pointing to all the evidence that  supports his defense.

“He does not disbelieve Ms. Ford, he believes something very terrible could have happened to her, but it just wasn’t him that did it. So he was very compassionate toward her, but very strong and very unmistakable in denying these allegations. He swore before God,” she said.

The Senate Judiciary Committee is expected to advance Kavanaugh’s nomination to the full Senate, and procedural action Friday and will set up a potential confirmation vote as early as Tuesday.