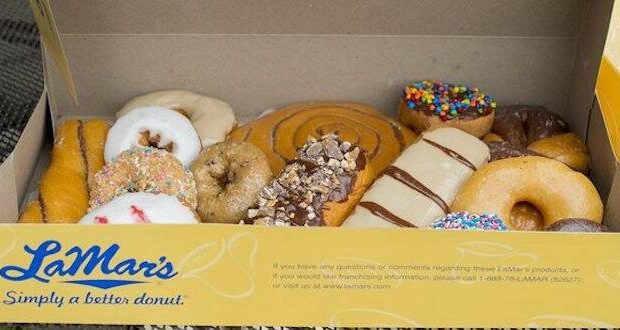 LaMar’s Donuts has a sweet offer for healthcare professionals on the front lines of battling coronavirus. The Kansas City company is establishing an Internet hotline for hospital doctors, nurses and other clinical workers to place orders for delivery of free donuts and coffee to their workplaces.

LaMar’s Donuts, which has been crafting handmade donuts from the same original recipes created by its founder Ray Lamar since 1933, will provide up to 10 dozen donuts per hospital shift plus a 96-ounce Joe To Go take-out container of coffee on Mondays and Tuesdays at no charge to each hospital within 10 miles of any of its locations.

“LaMar’s Donuts has a long tradition of making donations to community service professionals, especially police, firefighters and active members of the military,” President Matt Joslin, said. “Now it’s the medical professionals’ turn. We’re enormously thankful to be able to continue making donuts during the current crisis and want to show our gratitude to hospital professionals risking their lives to help save others.”

Healthcare workers can place orders online by going to www.DonutsRX.com and selecting their hospital’s name from a menu. Deliveries will made between 7 a.m. and 2 p.m. local time on Mondays and Tuesdays.

LaMar’s Donuts has remained open throughout the pandemic, although the company has closed indoor dining areas and limited the number of customers allowed in each store at once. LaMar’s Donuts plans to continue the free-donuts offer to healthcare professionals until further notice.

After developing his original donut recipe as a teenager in 1933, Ray Lamar opened the first LaMar’s Donuts in 1960 in Kansas City. Today, the franchised chain has 25 stores in five states. LaMar’s has won numerous awards and favorable reviews by such publications as The New Yorker and Gourmet magazine and was the first donut to be reviewed and acclaimed by Zagat, the world’s most trusted guide to restaurants.