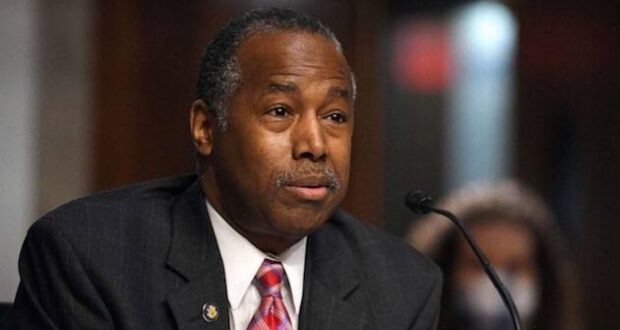 The United States has become schizophrenic about God, says Ben Carson, former neurosurgeon and secretary of the Department of Housing and Urban Development.

“When you stop and you think about it, our founding documents, the Declaration of Independence, talked about certain unalienable rights given to us by our creator, aka God,” he told Newsmax. “We are one nation under God. In many courtrooms, it says, ‘In God we trust.’ In every coin in the pocket in the building, it says, ‘In God we trust.” And yet you have people saying you’re not supposed to talk about God in public.”

The nation, he said, needs to “go back to recognizing those values that created the kind of country that we have.”

His comments came after former President Donald Trump, addressing the Faith and Freedom Coalition in Nashville, predicted that conservative Christian values will have a major impact on the midterm elections and said that in the United States, “we don’t worship government. We worship God.”

Carson said he believes Trump is correct and that people will vote because they recognize the importance of the country choosing whether to be moral and “not one that necessarily judges everything and tries to create morality through law, but one that actually understands the underpinnings of morality and kindness and decency and fairness. And that’s what we need, and I think we’re moving in that direction.”

He also responded to a Gallup Poll showing that the belief in God has fallen to its lowest level in 78 years, saying, “Read a lot of the Marxist ledger from over 100 years ago, or even just 50 years ago, and you see how they concentrated on the morality of America and how could they interfere with our faith in God and our love for our fellow man and our families.”

Finally, he commented on Juneteenth celebrations, noting that the holiday celebrates the emancipation of slaves, and that is important, but it is also important to build a future on successes.

“Slavery was a horrible mark on our society; there’s no question about that,” Carson said. “But I do emphasize in my book, it wasn’t unique to us. We need to decide now: Do we want to build our future on the successes that we’ve had, which have been many, or on the things that have happened that have been unfortunate?”