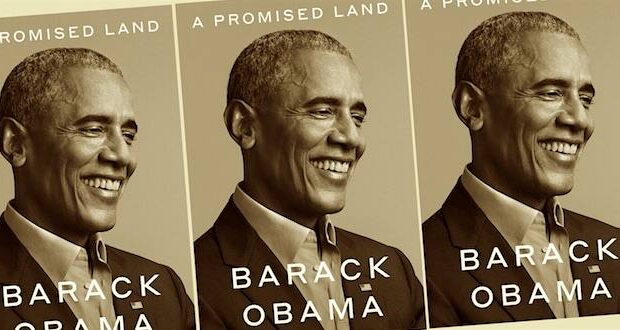 Former President Barack Obama has been a frequent guest on media outlets this week as he promotes his new book “A Promised Land.” It’s part of a $65 million deal with publisher Crown.

The book is the first of a two-part memoir and deals with his childhood up to the first half of his administration. Members of the press, who are largely liberal, have embraced the book, but conservative commentators have focused on the division the book encourages. In fact, the former president spends an inordinate amount of time disparaging Republicans by calling them “xenophobic” and racist.

According to Amazon, “Obama takes readers on a compelling journey from his earliest political aspirations to the pivotal Iowa caucus victory that demonstrated the power of grassroots activism to the watershed night of November 4, 2008, when he was elected 44th president of the United States, becoming the first African American to hold the nation’s highest office.

“This beautifully written and powerful book captures Barack Obama’s conviction that democracy is not a gift from on high, but something founded on empathy and common understanding and built together, day by day.”

Amazon’s fawning review corresponds to the book’s pretentious title – “The Promised Land” – a riff on the biblical and historical Promised Land. The book is also a staggering 768 pages and retreads ground covered in his other memoirs, which will likely frustrate and dissuade some.

But much of the controversy comes from some of former President Obama’s statements, including that Republicans are “xenophobic and paranoid.”

In excerpts, published by CNN, Mr. Obama wrote, “It was as if my very presence in the White House had triggered a deep-seated panic, a sense that the natural order had been disrupted. Which is exactly what Donald Trump understood when he started peddling assertions that I had not been born in the United States and was thus an illegitimate president. For millions of Americans spooked by a Black man in the White House, he promised an elixir for their racial anxiety.”

Though most of the book is dedicated to his administration, President Obama writes routinely about his contempt for the Republican party. He wrote, “Through Palin, it seemed as if the dark spirits that had long been lurking on the edges of the modern Republican Party — xenophobia, anti-intellectualism, paranoid conspiracy theories, an antipathy toward Black and brown folks — were finding their way to center stage.”

It’s unclear how former Alaska governor and 2008 Republican vice-presidential candidate Sarah Palin contributed anything to this characterization of the Republican party.

After Democrats lost control of the House in 2010, Mr. Obama reflected, “As far as I was concerned, the election didn’t prove our agenda had been wrong. It just proved that…I’d failed to rally the nation, as FDR had once done, behind what I knew to be right. Which to me was just as damning.”

A chamber, especially the House of Representatives, switching parties during an administration is usually considered a reflection on the current president and his policies. Though “Obamacare” was his preeminent achievement, many Americans were unconvinced, and the policy remains problematic and a source of contention to this day.

President Obama also blames the election of Donald Trump as the “Republican party’s attempts to appeal to white Americans’ anxieties about the first black president—a sentiment that had migrated from the fringe of GOP politics to the center—an emotional, almost visceral reaction to my presidency, distinct from any differences in policy or ideology.”

In short, the former president is accusing President Trump’s broad base of racism.

Instead of looking at the opposition, Mr. Obama might realize that he’s reflecting identity politics. As an opinion piece  in The Hill points out, “Amid relentless ‘woke’ accusations of white supremacy and racism, Donald Trump garnered the largest share of Asian, black and Latino votes of any Republican presidential candidate in 60 years.”

Per CNN, Obama’s dislike for Republicans is “infused into all aspects of the book.”

Mr. Obama wrote, “One of the reasons I’d chosen Joe to act as an intermediary — in addition to his Senate experience and legislative acumen — was my awareness that in [Senate Majority Leader Mitch] McConnell’s mind, negotiations with the vice president didn’t inflame the Republican base in quite the same way that any appearance of cooperation with (black, Muslim socialist) Obama was bound to do.”

Speaking on Fox News’ Sean Hannity, political commentator Candace Owens looked back on Mr. Obama’s election in 2008, noting, “It felt like we finally had arrived at a place in this country where we could put the past in the past,” she said. “Barack Obama became the president of the United States because white Americans supported him. And rather than show some unity, rather than show some respect for this country that gave him literally everything he has, he turns his back … and says, ‘Look at this despicable country. It’s broken.’”

No doubt this book will be a bestseller, though it’s questionable how many will fully slog through its 768 pages, especially as he continually attacks and disparages half of the American population.