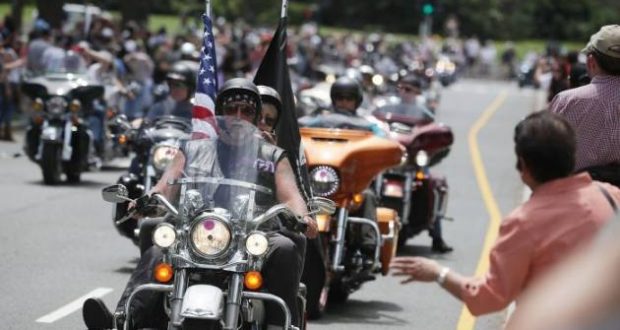 Rolling Thunder promises to have Pres.ident's back ahead of impeachment efforts

Organizers of the Rolling Thunder motorcycle ride predicts bikers will descend on Washington if Democrats try to impeach President Trump.

“I think he’s doing a great job, and I wish Nancy Pelosi and her cronies would get off his back,” Rolling Thunder executive director Artie Muller told the Washington Examiner.

Rolling Thunder First Amendment Demonstration Run participants recently had their final ride through the nation’s capital this past Memorial Day weekend, the Examiner reported. They have been gathering yearly for the ride since 1988.

Muller said that if Democrats ever managed to move into impeachment proceedings, other patriotic Americans would descend along with bikers on Washington, the Examiner reported.

The purpose of the yearly Rolling Thunder event is to “bring awareness and accountability for POWs and MIAs left behind,” according to the organization’s website, which says that there are still 86,521 military personnel that remain unaccounted for from wars and military conflicts that go back to World War I.

Muller is a 74-year-old former Army sergeant. He served during the Vietnam War, the Examiner reported. He said he feels that President Trump “speaks the truth” and that House Speaker Nancy Pelosi is an “arrogant little [expletive].”

He said that certain Democratic Party leaders need to be investigated, not Trump.

“Same with Hillary Clinton. Hillary Clinton and Nancy Pelosi should open up their closets and put some charges against them,” he added, via the Examiner.

Trump thanked the bikers on Twitter, wishing them many more runs in the years ahead.

“The Great Patriots of Rolling Thunder WILL be coming back to Washington, D.C. next year, & hopefully for many years to come. It is where they want to be, & where they should be. Have a wonderful time today. Thank you to our great men & women of the Pentagon for working it out!” Trump wrote.

Muller said the event won’t end, but instead of having only one huge event in Washington, he is planning to hold multiple smaller events across the country, the Examiner reported.

The 2019 ride attracted more than one million participants, according to the Examiner. The group has had trouble coordinating the event with people in the Pentagon parking lot. The lot was used as a gathering site for ride participants.

“As federal police officers, Pentagon Force Protection Agency personnel consider all relevant safety and security-related information while facilitating access,” said Pentagon spokeswoman Sue Gough, via the Examiner. “Effective preparation for an event the size and scale of a Rolling Thunder ride is a complicated and lengthy process.”

The group was unable to find an alternative to the Pentagon parking lot with the necessary accommodations, the Examiner reported. Despite this, he plans to continue with some of the D.C. events the group organizes for the yearly ride.

The Rolling Thunder board of directors are all veterans, according to the organization’s website. The organization was started by Ray Manzo, a Vietnam veteran who was frustrated about the lack of accounting for the many prisoners of war and missing in action personnel from that war. He organized veterans in Washington D.C. to gather and protest via a motorcycle ride. On its first run, the event had 2,500 people. Now it has over a million people and has become the country’s largest single-day motorcycle event.