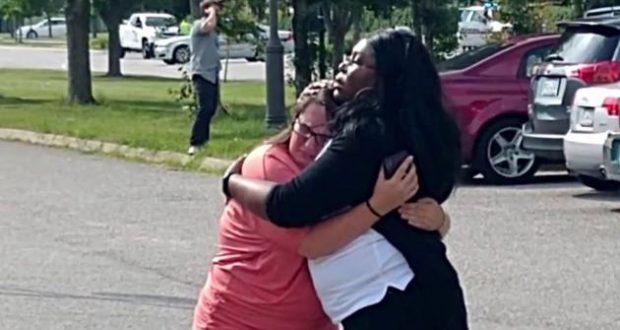 Twelve people are dead after a city employee opened fire at the Virginia Beach City Municipal Center. The attack, which ended Friday afternoon, ended when the shooter was killed d in an exchange of gunfire with police.

Mayor Bobby Dyer called it the “most devastating day in the history of Virginia Beach.”

“We have to have the resolve and the resiliency to work through this going forward,” he continued. “And I really think that knowing the Virginia Beach community – people are going to come together. People are going to unify and try to help out the families and the friends.”

“This was a community tragedy,” he added.

The attack happened shortly after 4:00 pm when a longtime employee of the Public Utilities Department who Virginia Beach officials identified as Dewayne Craddock, entered the building and began shooting “indiscriminately at all the victims,” Virginia Beach Police Chief James Cervera said.

Four police officers responded to the scene – two detectives and two from the canine unit – and engaged the suspect in what the chief described as a long-term gun battle. One officer was shot but was saved by his bullet-proof vest.

By engaging the suspect, the officers kept him from taking even more lives, Cervera told reporters.

Victims were found on all three floors of the building, and the scene could be described as a “war zone,” he said. A .45 handgun and multiple extended magazines were found empty at the site.

Ten of the victims were found in the building and one outside in a car; another died on the way to the hospital.

Craddock, an engineer, had recently been fired from his position, according to ABC News.

Virginia Beach City Manager Dave Hansen said 11 of the 12 people who were killed were city employees. He told reporters the families of the victims have been notified.  Hansen also said he’d worked with most of them for many years, and they “leave a void that we will never to able to fill.”

Rep. Elaine Luria (D-VA) shared that she had been in the area just minutes before the shooting.

“And so when you’re close by something like that, it drives home how vulnerable we are everywhere to this type of violence,” Luria continued. “I’m fortunate that I came home tonight, but what’s tragic is the families who their parents, their sons, their daughters – they didn’t come home tonight.”

“Each victim leaves a hole in their family, in their neighborhood, in their community,” Gov. Northam said.

“We must take care of these families. They will need support in the months and years to come.”

Vigils Planned for Saturday and Sunday

Local news outlets are reporting several vigils have been planned to honor the victims and for the Virginia Beach community to mourn.  All events are open to the public.

Pastor Matt Oliver with Life House Virginia Beach has scheduled a prayer vigil at 10:00 am Saturday at Regal Cinemas, located at Strawbridge Marketplace.

Bridge Church will hold a prayer and support vigil at 6:00 pm Saturday. The church is located at 3168 Indian River Road.

Grace Covenant Presbyterian Church at 2228 Princess Anne Road will host an ecumenical community prayer vigil along with other south Virginia Beach congregations at 7:30 pm on Saturday.

The Salvation Army is also helping in ministering to families, according to television station WVEC.

Previous: Rolling Thunder to fill Washington if impeachment proceeds
Next: How ‘Game of Thrones’ is part of human trafficking problem