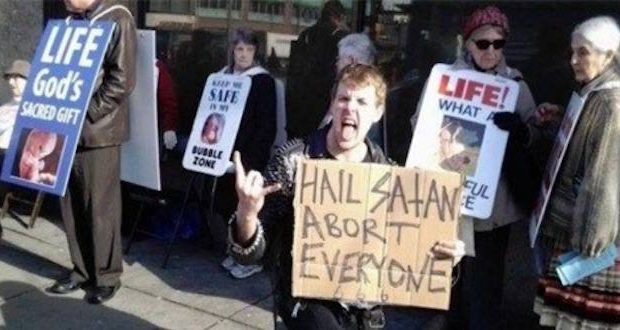 A Satanist protests in front of pro-life protesters. Satanists believe that abortion is "an act of worship."

A Satanist is upset with a Missouri law that requires doctors to give women a pro-life booklet and an ultrasound before performing an abortion. A lawyer for the Satanist argued before the Eighth Circuit Court in St. Louis this week that the requirements violate her First Amendment rights. Satanists believe that abortion is an act of worship.

The woman, known as Judy Doe, filed suit against the state in February 2018. U.S. District Judge Henry Autrey dismissed the complaint, prompting an appeal to the Eighth Circuit, according to Courthouse News Service.

MacNaughton filed a previous lawsuit in 2015 on behalf of another woman with nearly identical arguments. The Eighth Circuit dismissed that case due to lack of standing because the woman was not pregnant at the time of filing. The panel asked MacNaughton how this case was different. He said his new client has standing because she was pregnant at the time of filing the complaint. The judges also asked MacNaughton about what the physician can say when delivering the booklet.

“The physician delivers the booklet, but what you’re basically doing by having the physician do it is give him clerical garb and preach Catholic dogma,” the attorney said.

“Doe’s establishment clause claim fails to get off the starting blocks because it does not allege that Missouri’s informed consent law is one respecting the establishment of religion,” Reed told the panel. “Our position is that the complaint only alleges secular beliefs or personal policy preferences.”

Previous: 10 food trends to look for in 2020
Next: University of Missouri ends relationship with Confucius Institute